in a suit. A whole clothing line was conceived for this film, which actually does hinge on refined bespoke menswear.

While in France, I saw this movie advertised as a cross between James Bond and Quentin Tarantino. Watching the film, the James Bond references slap you in the face – the martinis (gin, stirred for ten seconds while glancing at an unopened bottle of vermouth), the gadgets, the weaponized body parts! And while it’s not quite a spoof, it’s definitely subversive. Colin Firth is a Kingsman, one of many gentlemen spies who teach the uncouth of the world lessons in manners while being blood-

lustfully unmannered themselves. He will beat you to a pulp, but he will do so with his couture umbrella. Which is possibly where the Tarantino flavour seeps in – not just in the casting of Firth, who took home an Oscar for his portrayal of a King, but was sent by Vaughn to a gym for 6 months, equipped with a signet ring\hand grenade, and unleashed on the world as an action star to take notice of – but in Firth’s character itself, “tea and testosterone” they’re calling it, a razor-sharp dichotomy you won’t be able to take your eyes off of. Nor should you – Vaughn dives right into the action, and that’s where he stays.

Is this a good movie? Having just wrapped up Oscar season, it’s hard to say a resounding yes. But it IS an awful lot of fun. It’s gleefully violent, unapologetically politically incorrect, and often seems to make a joke out of itself (not all of them land but there was a lot of laughter from the surprisingly hearty Kanata audience). Sam Jackson as the supervillain, lisping away as he takes over the world, is brilliant. He and Firth are having fun. And the young street punk recruited by Firth – played by newcomer Taron Egerton – who must compete with more conventional types to win a 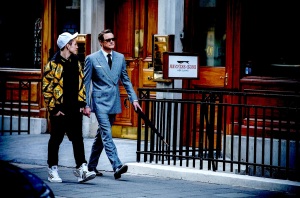 spot on the elite spy team brings not only a nice juxtaposition but yet another excuse for non-stop action. Vaughn has plenty of other movies to his credit (Layer Cake and Kick Ass) but this is the one he was born to direct, finally melding gangsters with superheroes and coming up with something all his own.

This movie is definitely not fit for grandma, nor for gentlemen. It’s an energetic bloodbath. It’s exuberantly excessive in its ultraviolence, stylishly brutal, an extravagant killfest. And it’s a massacre to which you’ll enjoy having a front-row seat.

5 thoughts on “Kingsman: The Secret Service”