It’s not going to take a whole post to tell you I didn’t like Run All Night. I mean, it’s fine. It’s exactly what you expect. It’s a movie capitalizing on Liam Neeson’s strange turn as an elderly 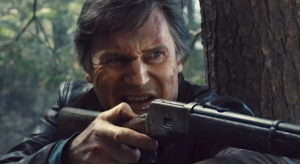 action star. It doesn’t bother to be particularly good, not even as good as Taken or The Grey, which didn’t set the bar high to begin with. Liam Neeson plays a retired goon who gets pulled back into the biz when threats to his estranged son force him to kill his best friend’s (and ex-boss’s) son. Father and son “run all night” to avoid the bullets they both know are coming.

Now, I’m not one to talk shit about Liam Neeson. That man’s just got sex appeal (Liam agrees, by the way – “I never did think of myself as handsome–terribly attractive, yes, but not handsome.”) Plus, I’d be worried he’d tape shards of tiny bottles of liquor to his hands and wake me up from sleep with his heavy breathing. Once upon a time, he was known as a “serious” actor, garnering an Oscar nomination for his role in Schindler’s List, and a couple of Tony nominations as well. Steven Spielberg was anxious to re-team with him for the Lincoln biopic but after several delays of the project, Neeson felt he was getting too old for the part and let it go to Daniel Day-Lewis. Apparently he’s not too old to run around the streets of New York, shooting cops and robbers though. He’ll be 63 this summer, and has somehow been rebranded the thinking man’s action hero (note to Liam: another movie like this, and we’re retracting the thinking part). He’s almost as surprised by this turn of events as we are: “I thought it was going to be a straight-to-video release (he’s talking about Taken). That is actually one of the reasons I did it, to be honest. I felt like spending three months in Paris, I’d get to do all this physical stuff that no one would think of me for, and that the film would go straight to video. Then it became this big success. I was a tiny bit embarrassed by it, a tiny bit, but then people started sending me action scripts.”

I bet he’s not so embarrassed now. He earned a nice 5 million dollar paycheque for Taken, but

for Taken 2 he demanded 15, and he got 20M for Taken 3. So he’s not just a bankable action star, he’s making serious bank doing it. Liam Neeson is only the latest incarnation of the aged action hero, he’s not the first and I have a feeling he’s not the last. For some reason we have an obsession with old, grizzled action stars and The Expendables series is all over it like a donkey on a waffle.

There is no young hot new action star. There just isn’t. A young man’s action movie has been taken over by the super heroes and that’s created a vacuum where the old guys have been allowed to stick around, and in fact, have been brought back, resurrected. These are action

movies for Baby Boomers, the generation THAT WILL NOT RETIRE. Arnold Scharzenegger (67) has a new Terminator movie in the works. Sylvester Stallone (68) has a new Rocky movie. Bruce Willis (turns 60 later this month) is working all kind of action franchises, Die Hard certainly, and Red, and has even more in the works. You cannot kill these men, or the characters they originated before I was born.

Speaking of invincibility: the most pervasive action star is Tom Cruise. He’s “only” 52, a young man in this crowd, but this ageless wonder has somehow kept his body in vintage form. It’s very possible that he sleeps in a large pickle jar and only comes out to run very, very fast on camera, pumping his little arms in a $2000 wind breaker, or else to flash his whitewhite teeth on the red carpet. And I’m sure he pays handsomely for a crack team of Scientology “doctors” to pull very , very hard on his strings to keep everything where it should be: a fine specimen. No wonder he’s in better shape than he has any right to be. In the next few months we’ll see him in Mission Impossible 5, Top Gun 2, and Jack Reacher 2. It’s guys like Cruise who make guys like Colin Firth (54) think they should give it a chance too – hit the gym, do your own stunts, the works, which Mr. Darcy does rather well in Kingsman.

Hollywood is bending over backwards to tell boomers what they want to hear: you’re not irrelevant! We still need you! You’re still capable! “Retirement is for sissies!” as one of Sly’s posters for The Last Stand so succinctly put it. Not only are we reassuring boomers that they’ve still got it, the narrative is that they’re actually better than the young men trying to push them out of the way. In Taken, and in Red, and in countless others, the opponent is much younger (almost as young as the action star’s wife – gross!). In The Expendables 2 (SPOILER ALERT!) there’s only one young guy on the team, and he’s the one who dies. Because boomers are so much better than everyone. Because they have all this valuable life experience, and even if their bodies are a bit droopier, and their reflexes a bit duller and their instincts a bit slower they can still magically make the young dudes disappear. As always in life, the old white man is king.

7 thoughts on “Run All Night: An Ode to Aging Action Stars”