Not a super duper movie, but for once it’s not Adam Sandler’s fault! He reins in his inner moron  to give a modest but adequate performance. In Hebrew his name, Sandler, means cobbler so it’s fitting that he plays the Brooklyn shoe maker resentfully hanging on to a business his father owned and abandoned when he abruptly left his family.

One night Sandler stumbles on a secret hidden in the basement: if you mend shoes using an antique machine, you can become the shoes’ owners simply by wearing them. This is just the escape he was needing – to slip into 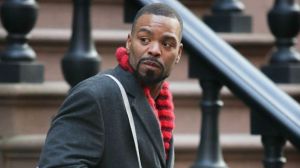 someone else’s skin, live a more glamourous life, see the city or even just the neighbourhood from someone else’s eyes. This is where The Cobbler becomes Freaky Friday. The body swap schtick means that Method Man gets to do his meanest Adam Sandler impression, and mostly fails. Dan Stevens does passably better, but his time in the film is short.

At any rate, this is a pretty neat party trick that fails to develop into anything exciting or worthwhile. In fact, the results lack any imagination whatsoever. You kind of feel like the director

dangled the carrot, and then put the carrot in his pocket and walked away. Critics on Rotten Tomato have it sitting at a limp 9% although he’s got his mother beat, and his lover too (Reese Witherspoon played his angelic mother in Little Nicky; her film Hot Pursuit’s currently at 7%. Kevin James, who played his pretend boyfriend in Chuck and Larry, is sitting at 6% for Paul Blart: Mall Cop 2). Audiences, however, are much more generous with middle of the road reviews, calling it “watchable,” “potentially charming” and “a slight step up from Adam Sandler’s recent comedies.” Hear that? That’s the sound of ringing endorsements!

17 thoughts on “The Cobbler”