I don’t know if the lineup at the Toronto International Film Festival is better this year than in previous years I’ve been but choosing my films and fitting them into my schedule is harder than ever. Maybe it’s because I prepaid for 12 tickets over a four-day period (my most ambitious itinerary yet), making the choices seem unlimited. Well, almost unlimited. Every time I choose a movie, I have to give up another one and I had forgotten how painful it can be to scratch something from my list.

Here’s what I’ve decided on. What do you think? Is anyone else going to TIFF? What’s made your list?

intense drama about a grieving investment banker who copes with the loss of his wife through what the TIFF website describes as “random acts of destruction”. Not sure what that means exactly (although the write-up goes on to say something about an office washroom stall) but both Gyllenhaal (Prisoners, Nightcrawler, and Southpaw) and Vallée (Dallas Buyers Club, Wild) have been killing it lately and I can’t wait to see what they can come up with together. My only regret is that I’ll be catching the last of three screenings at TIFF, making me worry that Jake may not bother to show up. 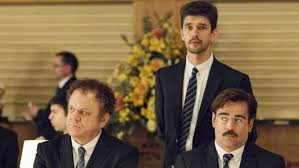 The Lobster– An enthusiastic reception from the Cannes jury convinced me to give this seemingly very strange movie a shot. Newly single Colin Farrell checks into a hotel where guests are given the task of finding a new partner within 45 days and the punishment of being turned into an animal and released into the wild if they fail. From Yorgos Lanthimos, a supposedly acclaimed Greek director that I’ve never heard of, I have no idea what I’m in store for here. I have a feeling that this bizarre-sounding film will either be my favourite that I see in Toronto this year or the most aggravating. Either way, I’m expecting to react strongly to it.

collaboration between Quebec filmmakers and American movie stars. Emily Blunt, Josh Brolin, and Benicio Del Toro make up an inter-agency task force that take on a dangerous mexican drug cartel and, from the sounds of it, will have to make some tough decisions about how far they’re willing to go. I picked Sicario out of the bunch because of Villeneuve, a very intersting filmmaker with a great eye and a bit of a dark side. His films are usually tough to shake off and I’m hoping this one will be too. You can see the trailer here.

party too hard after Eye in the Sky’s premiere on Friday night because I’m hoping to see them all at 11:15 this morning. I love all three of them and the film’s plot- about an ends vs means dilemma concerning an innocent child in the line of fire of a drone targetting a terrorist. The synopsis on the TIFF website makes it sound like a mix of comedy of errors and topical thriller and this cast this concept sound promising, especially with the right script.

Ninth Floor– A Canadian documentary about the 1969 occupation of Sir George Williams University’s (now part of Concordia University in Montreal) by students protesting against the school’s systemic racism. I always try and catch at least one documentary when I visit the festival and I chose this one both because 1) I did my Undergrad at Concordia (they told us this story at

orientation) and 2) the TIFF website sells this as not only an account of this one story but the larger story of how Canadian citizens and institutions hide their racism while boasting of their tolerance to the rest of the world. Check out the trailer here.

Hardcore– I try and see at least one Midnight Madness screening every year and I chose, partly through the process of elimination, this “non-stop, white-knuckle, crackerjack thrill ride” about a Russian super-soldier trying to save his wife from- get this- a “psychotic paramilitary psychic”. I love the rowdy mood of these midnight genre screening, a nice break from the more pretentious tone of some of the other screenings, but am not a horror fan. Because all the other Midnight films seem to be about Hell and demons and posession, I settled for this out-of-control action movie. Apparently it’s filmed almost entirely from the POV of the hero, which sounds intriguing. Hardcore even.

About Ray– Born female, Ray (Elle Fanning) has always felt he was born the wrong gender and

finally feels ready to commit to the surgery. Only trouble is he needs the signed permission of both parents. Fanning, Naomi Watts, Susan Sarandon, and Tate Donovan star in this comedy-drama with an amazing trailer. Can’t wait for this one.

Closet Monster– Three years ago, I caught a TIFF screening of a fantastic Canadian film called Blackbird, which featured an impressive lead performance by a young actor named Connor jessup. Jessup returns to the festival this year with this surreal-sounding Canadian drama about an aspiring make-up artist in a small Newfoundland community where he feels suffocated and is haunted by increasingly vivid nightmares of coming out to his father. 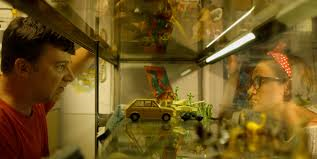 The Missing Girl– A lonely middle-aged comic book store owner becomes obsessed with finding out what happened to his missing young employee when her disappearance triggers his adolescent memories of another missing girl. Not sure exactly what to expect here but the trailer has my attention.

Remember– The great Christopher Plummer stars in what sounds to me like a Mementoish road trip thriller from Atom Egoyan (The sweet Hereafter). Plummer plays a nursing home resident 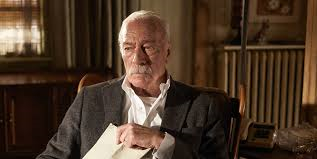 whose memory is beginning to fail him. Before it’s too late, he must follow a step-by-step plan laid out for him by the mysterious Max (Martin Landau) to escape his nursing home and track down and kill the man who murdered his family 70 years ago. Check out the trailer. i can’t wait. Even if Plummer isn’t there to answer our questions, I’ll be happy just to see this.

Freeheld– I’m often skeptical about Based on a True Story movies if there’s even a chance that I’ll see even half of this cast on stage, I’m there. Ellen Page, Julianne Moore, Steve Carell, and Michael Shannon star in the story of a terminally ill police officer fighting for the right to pass on her pension benefits to her same-sex partnerIt runs the risk of being a little preachy but with this cast I’ll keep an open mind. Besides, it’s a story worth telling. Here’s the trailer.

Spotlight– With a trailer that looks just amazing, this based-on-fact drama about the Boston Globe’s investigation into the Catholic Church’s cover-up of sexual abuse at the hands of their priests stars Mark Ruffalo, Rachel McAdams, and Michael Keaton. It’s from the director of the amazing The Visitor and the not-so-amazing The Cobbler so it’s hard to tell how good it’s going to be but I’m daring to get my hopes up. 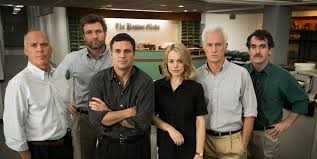 41 thoughts on “My TIFF Choices”