It managed to earn $70 million in its opening weekend, more than the $65 million the original earned during its entire domestic theatrical run back in 2012. The only other sequel to have out-earned its original in the first weekend was Austin Powers: The Spy Who Shagged Me, so rest easy, Internet, we’re in good company.

Pitch Perfect The First was a bit of a gamble for me, having a raging hate-on for Anna Kendrick and all, but the Fat Amy effect seemed to mitigate the bad Anna juju. And I managed to look past the Miley Cyrus tribute with generous applications of ladies of the 80s, and forgave a song featuring the actually-talented Sia being referred to as “that David Guetta jam” (FUCKING BULLET TO MY HEAD). All things considered,  totting up the pluses and the minuses, I found that it was a slightly net positive. Win.

The sequel, however, has left me feeling distinctly negative. My sister, a fan of the first, felt the music was lacking this time around. Except for some 90s hip hop, it was. There are some scenes that are blatantly trying to reignite the flame of the first, but none are entirely successful, and some are incredibly not. But what really stood out for me was how offensively one-dimensional  some of the characters are. Character development is a joke – we don’t learn anything new about anyone, but some are reduced to stereotypes that should shame us all.

Ester Dean is back as Cynthia Rose, and to be honest, I’m surprised she even has a name because as her character is actually reduced to saying in the movie, she’s the black lesbian, and she does nothing in the film (beside providing the requisite rap interludes – and she actually has a lovely voice) is remind us how she’s a lesbian, which means she can’t help constantly macking on every single woman around her. Like, grope her friends’ breasts and try to take advantage of a sleepover situation. She has absolutely no other character traits or back story until at the very end she proclaims that she’s moving to Maine to have a gay wedding and we’re all invited! Does she have a partner? We’ve certainly never heard of her before this moment, and she remains unnamed, which is maybe for the best since just a tiny bit before this her supposed fiancée is molesting her mates, because as you know, gay people are walking same-sex hard-ons and no one is safe from their sloppy gay groping, especially not their close personal friends.

Meanwhile, Chrissie Fit is brought on board this time to fulfill the role of illegal immigrant who 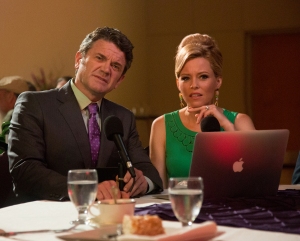 reminds everyone how lucky they are to be in college without apparently having to attend a single class or work a job or worry about tuition or the job market, let alone having diarrhea for 7 years like she did back in Guatemala. Her plans for the future? To be deported immediately upon graduation, of course! But don’t worry, all the white girls go on to have happy, well-rounded lives. Well, the thin ones at least.

This movie is Elizabeth Banks’ first turn behind the camera, though I believe she also produced the first one. I wish I could support a movie that has a female screenwriter AND director AND a whole bevy of stars, but no. This one’s a perfect pass. Kudos on the Snoop cameo though. Now that was pitch perfect.