Abe (Joaquin Phoenix) is a burned out, impotent philosophy professor who’s looking for the will to live. A fellow teacher (Parker Posey) throws herself at him and a pretty and 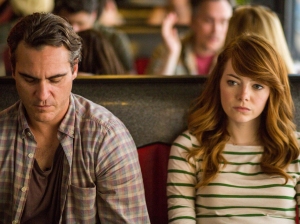 promising student (Emma Stone) engages him mentally, but he’s still, shall we say, unresponsive, until he starts plotting a hypothetical murder.

Joaquin and Emma have an easy rapport that’s eminently watchable, when the dialogue’s not getting in the way. The story is partially inspired by Dostoevsky’s Crime and Punishment, about a university student who commits murder to prove that he is morally superior to other people. But both Dostoevsky’s student and Woody Allen’s professor are only pretending that murder would be to help others, or the world in general. In fact, it’s a pretty selfish pursuit, even when purely cerebral. Can thoughts of murder really be a “creative 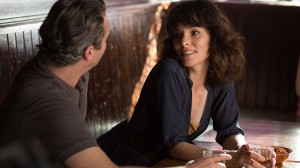 endeavour”, or is that just the typical justification of an unfulfilled philosophy professor?

Woody Allen struggles to sound authentic around some of the philosophical arguments, and Joaquin doesn’t do a much better job conveying them. And Allen’s dialogue surrounding the erection difficulty is as stilted and awkward  as only Woody Allen can be – which doesn’t quite sound right coming from Joaquin, even with his 30 pounds of pot belly. Allen’s more adept with the cynicism and the dark humour (not to mention age-inappropriate romance), and when the material’s good, he’s hired actors talented enough to handle it. So this movie is not without merit. It’s also just not very original (even among Allen’s oeuvre) or very necessary, and the unevenness almost drove me batty.