It was about this time 6 years ago when my mother went to her school’s Christmas party and the janitor brought a date who thought my mom would be perfect for her dad. Turns out, she was right, and now Jay has a new daddy.

That’s the condensed version, anyway. She has 4 kids, he has 2, and together they have 5 grandsons and 1 extremely imminent granddaughter. We have a weird blended family but those sweet grandkids have never known any different.

In Mistress America, two women make nice because their parents are about to marry. Tracy, a lonely college freshman (Lola Kirke) is 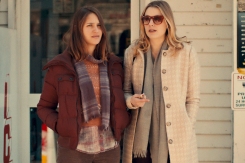 thrilled to go along on the adventures of her impetuous 30-something soon to be step-sister, Brooke (Greta Gerwig). Sure she’s uneducated and unstable, but to an 18-year-old, that seems glamourous and free.

Greta Gerwig is a force of nature – like, that’s her permanent state. Is Gerwig her generation’s Diane Keaton? Or maybe she’s a little 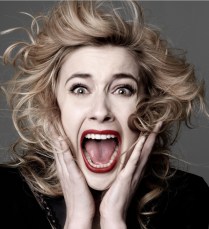 more screwball than that? I can never quite put my finger on it, but she’s a gem and a star and man oh man I can never keep my eyes off her. Her performances feel free and unselfconscious, just totally unleashed and genuine. She has a physicality that I’m not used to with young actresses, a way of using the space, of filling up the screen without taking up all the room.

She co-wrote this script with director Noah Baumbach and the lines just keep zooming by; you can almost see the trail they’re blazing around the screen as they get launched by one character and hit their target. This is Baumbach’s funniest – and dare I say, most

The movie’s as flighty as its main character, but I was utterly charmed not just by the leads but by the entire cast, who lend the movie that feel of an older comedy, with randoms popping up with funny lines and disappearing again just as quickly, keeping us guessing, keeping us on our toes. It makes for an almost caffeinated ride, and it has left me wanting (needing?) more.