On the one hand, rain makes you feel a little less guilty about spending the last few days of summer sequestered in movie theatres. On the other hand, there’s the standing in long lineups outside the movie theatres getting icy cold rain down your back, and the dampness in your shirt never dries in the movie theatre air conditioning. So you spend the whole day with a case of the shivers. But you also get to meet really cool people – a gentleman outside the Scotiabank theatre who sheltered me with his umbrella (while occasionally sending a big dump of sub-zero rain down my cleavage, but the intentions were good), an older woman I dubbed the blue angel for her raincoat who insisted I take her umbrella while waiting outside Bloor Hot Docs in the very early morning.Toronto festival goers are nothing if not courteous.

Miss You Already: This was the earliest I’ve ever been up for a movie, so if it was anything less than I was hoping, I would have been pissed. And the thing is, my expectations were tempered. It was directed by Catherine Hardwicke, who did Thirteen, but also Twilight. It stars Drew 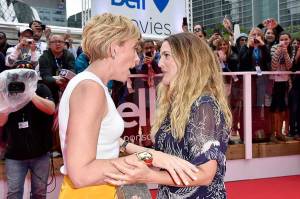 Barrymore, one of my favourite celebrities, and Toni Collette, one of my favourite actresses. Note the difference. Drew Barrymore does best when just allowed to do her bubbly self, and in this case she’s well-cast and well-used. She and Collette play lifelong BFFs who have their friendship tested when Barrymore finally gets her innermost wishes granted with a long-awaited pregnancy and Collette has her innermost fears realized with a cancer diagnosis that means she is possibly dying, her children soon to be motherless. Collette is an amazing actor, capable of anything, and she handles this material with exactly the aplomb you’d expect. But this isn’t a movie likely to make the Oscar circuit. It’s meant to be crowd-pleasing, in a ten-pack of tissues sort of way. And it is. It’s a solid commentary on women and friendship, and what it means to be there for someone through thick and thin.

Maggie’s Plan: Greta Gerwig is the Diane Keaton of her generation. She’s kind of amazing in this neurotic, bohemian way. In this, she plays a young woman who is ready to have a baby, no matter what her best friend (and former lover) Bill Hader thinks. Of course, the minute she

makes her move, she meets a man and falls in love. He’s married? So what! You can’t let a stale marriage come between you and your true love – so the marriage between Ethan Hawke and Julianne Moore must crumble. Julianne Moore, by the way, is pretty much my favourite in everything lately. I will see her in two movies on this day at TIFF and can’t imagine two more different roles if I tried. Here she’s playing this European shrew with a wildly entertaining accent and immeasurable emotional peaks and valleys. I obviously hoped that this would be a good movie but was still pleased at how funny it was. And clever-funny too, which is always a relief. Kudos to another capable female director, Rebecca Miller. So thrilled to have seen so many talented women at this festival!

Closet Monster: Matt saw a talented young Canadian actor at TIFF several years ago in a movie called Blackbird. He knew that Connor Jessup was someone to watch out for, and he has. When

he was announced to be starring in Stephen Dunn’s feature debut, Closet Monster, he was sold, and he sold us on it too. Thank you, Matt, for that. Stephen Dunn directs a highly personal film about a young man “coming of age” (good lord I hate that expression) in small and small-minded Maritime town. As a kid, Oscar witnesses a brutal hate crime that leads to internatlized homophobia. His teenaged coming out, and coming to terms, are therefore traumatic. Dunn creates a stylized world of escape for his protagonist, with just a hint of “magical surrealism” to help the bitter medicine go down. It’s a beautiful debut and we were all glad to have been part of it.

Freeheld: An embarrassingly short time ago, as in earlier this century, two women met and fell in love, and when one got sick, the other was going to be left holding an empty bag because domestic partnerships still weren’t really respected in their backwards-thinking country, and her partner’s benefits couldn’t legally be inherited by her. This true story, belonging to Laurel Hester

and her widow Stacie Andree, is brought to the big screen with heaping sensitivity. You couldn’t ask for more from Julianne Moore or Ellen Page, who play the two lovers. Michael Shannon, as Hester’s partner, does a bang up job as the guy with a lot to learn. He’s a placeholder for the audience: we experience their story through his eyes. Sean and I saw Michael Shannon on Broadway a few years back (in an intense play along with Paul Rudd and Ed Asner, believe it or not) and we’ve watched him with gr

eater interest ever since. Steve Carrell pops up in the movie too – you may have noticed him in the trailers for this movie, as he’s the clown through which we achieve some catharsis. He plays a “big gay Jew” who basically manipulates a sick woman into stumping for his cause – gay marriage. And causes like that do need a face to make them real to people, but I couldn’t help but sympathize with Andree, who must have just wanted to spend that time with her dying spouse. It’s of course an emotional movie (Kleenex sponsored the premiere, and handed out tissues as we went in). It’s a good but not great movie – but it IS a great story, and I’m so glad it’s been respectfully told. And seeing it with real-life counterparts, including Stacie Andree herself in attendance was something that I will never forget.

Wow, Julianne Moore and cancer both featured heavily in this day’s viewings!

Finally, Matt took on Missing Girl, which you may be intrigued to know, or mystified to learn, that Matt describes as a “charming comedy about a missing persons case.” It’s not every day you hear that one.

Check out our other coverage here, and here, and stay tuned on Twitter: @assholemovies

14 thoughts on “It was another rainy day at TIFF…”