This is not technically a movie that needs to be reviewed. You’ve seen the trailers? You’ve seen the movie. Two people who look nothing alike with their wildly different heights and eye colours still manage to play sisters convincingly. Why? Because Tina Fey and Amy Poehler are real-life sistahs.

The movie’s okay. There are laughs to be had. The script is not what you would call original, and what starts out as a story about two grown women who regress when their parents decide to sell the old family home quickly degenerates into just another party movie (although this one populated by people old enough to know better).

What saves the movie is the remarkable chemistry between its two leads, Tina Fey and Amy

Poehler. These women have worked together far longer than we’ve been watching them, harkening back to Chicago’s Second City in the early to mid 90s where they were the only two women in the troupe. A former member of Second City named Adam McKay (who you may remember as the writer\director of MANY of Will Ferrell’s ridiculousest movies) was the head writer of Saturday Night Live in 1997 when he first encouraged Tina to submit scripts. Of course she was hired, and the very sketch she wrote for the show (that made it on air) was a Chris Farley satire of Sally Jessy Raphael – genius, of course. When McKay left in 1999, Lorne Michaels made Tina Fey SNL’s first female head writer.

Fey soon appeared on-camera and became co-anchor of Weekend Update in 2000. Amy Poehler would join her on the s 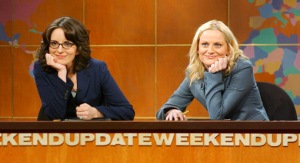 how just a year later, Poehler’s first episode being the first one produced after 9\11. Amy was promoted from featured player to full cast member during her inaugural season, making her only the third person to earn that distinction (joining Harry Shearer and Eddie Murphy).

Fey and Poehler became co-anchors on the Weekend Update desk in 2004, marking the first time that two women held the position. Fey left the next year as her new show 30 Rock began to take off though her tenure would hardly be forgotten; she’s been ranked as the third most important SNL cast member ever, just behind comedy gods John Belushi and Eddie Murphy. This left Poehler in a position to earn an Emmy nomination for Outstanding Supporting Actress in a Comedy Series – the first SNL cast member to ever be recognized in the category. Then she

too left SNL to star in her own show, Parks and Recreation. Both women met with tonnes of success, 30 Rock garnering a staggering 112 Emmy nominations over its run, and Parks and Rec giving Amy the opportunity to write and direct as well. Both women won Golden Globes for Best Actress in a television series, musical or comedy, and then went on to host the awards ceremony itself together for 3 of the roastiest, juiciest years running.

They’ve both also written books about their experiences as wives, mothers, and being the funniest people on the planet. Amy Poehler also helped launch Smart Girls at the Party with a couple of her friends, a show that  “aims to help girls find confidence in their own aspirations and talents.” In each episode, Poehler interviews a girl with a “unique talent, community interest or point of view” and if you haven’t checked it out yet, you probably should.

These awesome, barrier-breaking ladies have a long history together, and even if they’re not

blood, they call each other “chosen sisters” and that’s good enough for me. Screenwriter Paula Pell wrote Sisters with these two in mind, though she may have been imagining them cast in the opposite roles – which is what I liked about Sisters, actually. For once we get to see Tina Fey be all crazy. There’s a heaping helping of vulgarity too, but man does it almost sound sweet coming from the likes of Fey and Poehler. Paula Pell has a process for coming up with altnerative jokes, which the director would pass to the actors on post-it notes so nobody else would know what’s coming. Fey, Poehler, and the rest of the cast, including SNL alums Maya Rudolph, Bobby Moynehan, and Rachel Dratch, are all masters of improv, and that spontenaety was well-used. Paula Pell, mind you, was also an SNL writer, and has appeared on – you guessed it – both 30 Rock AND Parks and Recreation. Smart ladies stick together, and funny ladies keep us coming back.