Joe and Jerry have the serious bad luck of witnessing the St. Valentine’s Day massacre and need to get out of town fast. The only gig leaving the station is with an all-woman band, so Joe and Jerry show up as Josephine and Daphne, and the rest is comic gold. 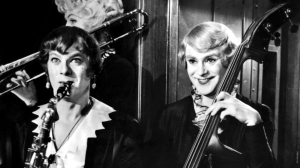 Tony Curtis and Jack Lemmon are dubious women but the disguises prove necessary when the very gangster they’re trying to avoid shows up uncomfortably close. The disguise is a further hindrance when Joe starts to fall for a fellow musician, the band’s fox ukulele player, Sugar Kane (Marilyn Monroe).

To be honest, I’m tickled just writing the synopsis. When, in 2016, do you get to write such words? Billy Wilder, you’re still the man. This is one of my go-to, feel-good movies. It never fails to make me laugh.

It was a super tough shoot though, because one of the stars was a bit of a diva. I’ll give you 3 guesses but you’ll only need one.

Marilyn never knew her lines. Not a one. It took 47 takes to get 3 little words

correct: “It’s me, Sugar.” She kept saying “Sugar, it’s me” or “It’s Sugar, me” which is harder to forgive. After the 30th take Wilder had the line written on a blackboard but one still wonders why a further 17 were required beyond that. Another difficult 3-word line perplexed her further still. “Where’s the bourbon” often came out “Where’s the whiskey?” or “Where’s the bottle?” so Wilder had it written into the drawer she rummaged through. Then she couldn’t find the right drawer so he had it written in all the drawers. 59 takes

later, she says the line with her back to the camera so you can judge for yourself whether she EVER got it right. Meanwhile, Tony and Jack had to stand around in painful high heels while she flubbed line after line, which can’t have earned any goodwill.

Marilyn’s contract stipulated that all her pictures be shot in colour but Wilder managed to talk her into black and white. The makeup on the men wouldn’t have been nearly so convincing in colour, he felt. She was actually reluctant to do the film at all, concerned about playing a character so dumb she couldn’t tell the girls were really men in drag. They convinced her with cash – 10% of the gross, which turned out to be a fantastic deal.

Decency. Kansas went one better though – the state banned the film from being shown there, explaining that cross-dressing was “too disturbing for Kansans”.  Luckily Vancouverites are made from heartier stock. As long as you aren’t pregnant and don’t have any pre-existing heart conditions, why don’t you check the film out at the Rio Theatre on July 6th. You won’t regret it.

And while you’re there, keep an ear out for the film’s famous last line. It was never meant to make the final cut and was just a place holder until the writers came up with something better. Both writers, I.A.L. Diamond and Billy Wilder, credit each other with coming up with it so I guess we’ll never know, but the “placeholder” has earned the 48th spot on the American Film Institute’s list of greatest movie quotes.