The truth is, Money Monster teeters between a comedy and a socio-political thriller and suffers tonally. George Clooney plays Lee Gates, a slick and smug TV show host who makes stock 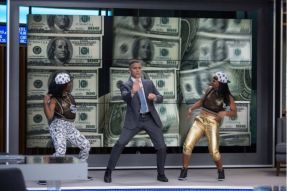 market recommendations in between hip hop dance moves, obnoxious hats, and lots of gimmicks. One day, live on the air, a young man (Jack O’Connell) shows up with a bomb, ready to hold him and the CEO of a certain company (Dominic West) accountable for the loss of his life savings. Julia Roberts, playing the show’s director, is stuck in the booth directing the hell out of a show that is now being broadcast worldwide to billions, while keeping her colleague (who suffers from foot in mouth disease) alive.

The problems start with Kyle, the young man who’s just lost everything. Kyle is the audience place holder. We’re not millionaire TV hosts, or billionaire CEOs. We’re the people who work hard for our money, and are subject to the whims of Wall Street. But there’s a problem with the character when he’s just not relatable – and not because he’s brought a bomb to a TV studio. In fact, I think I am more likely to start making revenge bombs than I am to ever lose everything in the stock market. You know why? Likely you do: because you never put EVERYTHING in the stock market! The stock market is NOT free money. It’s a gamble. Sometimes you win, 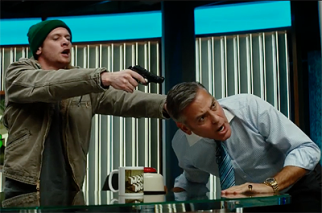 sometimes you lose. And if, like me, you know very little about this mysterious money market, you have to take advice from strangers. I tend to avail myself of the type of strangers who sit behind ornate desks with gold nameplates, but I take everything they say with a margarita-rim’s worth of salt and skepticism. Kyle preferred to go with the smarmy guy on TV who has a weekly “pick of the millennium” which is kind of like trusting Judge Judy to try your murder one charge – but who am I to judge? Kyle gambled his whole kit and caboodle and lost the kitty in no time. And did Kyle get mad at himself for being so rash? Of course not! Kyle is a dumb millennial who feels entitled to everything but responsible for nothing and so Kyle goes looking for someone else to blame, and brings a bomb as his sidekick. Nice one, Kyle.

So we don’t really feel badly for Kyle, but nor do we root for Lee Gates. He’s making a fat paycheque doing his thing on TV, and it’s pretty clear he’s forgotten that his words have real-world repercussions for people with far more to lose than he does. He’s a self-involved guy who hasn’t questioned anything until a bomb strapped to his chest forced him to. Between Kyle and Lee, it’s unclear to the audience just who the protagonist is. There aren’t any characters to really invest in – and yes, I’ve been dying to make that financial pun for 500 words now.

So maybe this is why some critics are calling this movie empty\hollow\vacuous.  Sean certainly felt that the film’s final moments were jarring, and maybe inappropriate. I had a different read on them though. 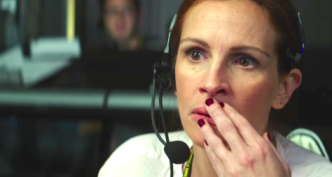 The movie is kind of a fun ride, with an almost real-time hostage situation, and we feel like we’re experiencing it along with the rest of the world. Imagine if this was happening in real life: you’d be glued to your TV or your tablet or your laptop or your phone. Where were you when President Kennedy was shot? When OJ fled in the Bronco? When the twin towers fell? Where were you when Lee Gates was held at gunpoint on live TV and made to account for his mistakes? Wouldn’t that be a Big Deal? But in the movie, the minute our characters hit a point of resolution, the whole world switches channels. They go back to their sandwiches and their IKEA catalogs. The immediacy with which it’s forgotten is arresting. Sean thought that was disgusting, and I thought it was brilliant social commentary.

So yes, I can understand why people are leaving this movie frustrated. But I also thought that was kind of the point.