Moral dilemma: one couple hosts another for a pleasant, mostly-vegan dinner party, and a little light snooping on the part of the guests turns up a suicide note.

What to do, what to do? Obviously the visitors, Penn (Lindsay Hicks) and Jasmine (Brittani Nichols), themselves a newish couple, are concerned for their friends, who up until now have been role models for a happy relationship. But you can’t be blunt about a note you just stumbled upon, can you? 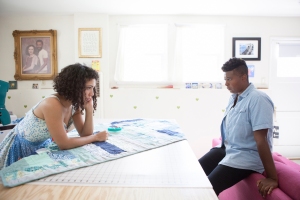 The brilliance of this film is that it makes you question what you would do, and it challenges our notions of propriety.

The quality’s a little wonky. It doesn’t quite have the production values you might hope for, and during the dinner scene the camera jitters around so much I had to look away to settle my stomach. Luckily, the conversation is jaunty and captivating enough to conquer some of the flaws. It flows authentically, and you’ll feel like they should have set a 5th place setting for you, the guest who definitely would have went for some wine.

The trick is that there’s a subtext that we’re aware of but not everyone at the table is. Penn 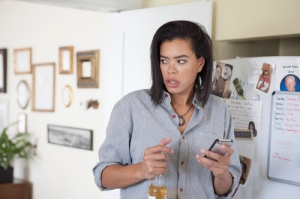 and Jasmine know a dark secret and are steering things to play sleuth. Billie (Jasika Nicole) and Jordan (Brianna Baker) know that something’s up but the note is the furthest thing from their minds. They’re just trying to navigate this incredibly uncomfortable encounter – and we’ve got front row seats!

So it’s noticeably an indie, but it’s also smartly written and well-acted and I’m very glad I gave it a chance because it’s quite endearing, and an interesting little slice of life.

This review first appeared on Cinema Axis as part of the Inside Out film festival coverage, a festival dedicated to showing LGBT movies.