If you were a fan of the series, you’re going to be a fan of Absolutely Fabulous: The Movie because it’s an absolute hoot and a real tribute to the show. If you’ve never heard of it though, you’re kind of out of luck. Show creator\writer\star Jennifer Saunders isn’t looking for converts with her script, 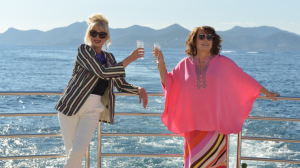 she’s simply paying tribute to those of us who will never get enough of Edina and Patsy.

The show wasn’t really “about” anything other than two fab women (well, fab in their own minds), PR reps Edina (Saunders) and Patsy (Joanna Lumley), who lived life in glorious, wondrous, oblivious excess. They worked little and spent lots, thinking mostly of themselves and the clothes they wore (mostly badly). Brand-obsessed and vain to their empty cores, I couldn’t help but love their ballsy hedonism. The show was vicarious fun and thanks to Saunders’s clever writing (not forgetting her brilliant partner, Dawn French), with frequent in-jokes and winks to the audience between scathing, cruel humour. The movie is very much like an expansion pack of a typical episode. This time Edina and Patsy fuck up on a world stage and for the first

time they’re finding that perhaps being hounded by the paparazzi isn’t quite what they’d always hoped.

Saunders and Lumley have excellent chemistry (as they should – they’ve been playing these characters off and on since 1992) and just seeing them together makes me feel effervescent. Every familiar face was like unwrapping a sweet, and I couldn’t get enough. Saunders can still write a mean sting and by god can they both deliver. These comediennes are not to be underestimated: even their banal hijinks are riveting. There’s no new ground here and a movie feels a bit of a stretch, but these women truly are fabulous and I feel fortunate to still be able to bear witness to their acid. I would gladly spend my remaining years in a nursing home alongside them as long as we never ran out of champers, sweetie dahling.

16 thoughts on “Absolutely Fabulous: The Movie”