It’s actually nearly impossible for me to believe I haven’t reviewed this one here yet because it’s such a treasure, one that continues to impress me in new ways every time I watch it. Coraline is 10 years old now and it’s safe to say the world of animation has changed in its wake. With Coraline, Laika showed that animated films could be more than just cartoons for kids. With gorgeous, artful sets, thoughtful stories, and dark themes, Laika has distinguished itself as a cut above, and Coraline has set the bar for so much that has come since. They weren’t the first to do this, of course, but they’ve certainly made the biggest impression on American box offices.

I happen to love stop-motion films because it feels like we’re so much closer to the artwork. 24 character puppets were constructed for Coraline, which kept 10 artists busy for four months. The Coraline puppet at one point shows 16 different expressions in a span of 35 seconds. When you stop to think about what that series actually means, the careful minutiae, the attention to detail, the willingness to expend so much work for a few seconds of film, you start to really appreciate the possibilities of stop-motion. Of course, there was no single Coraline puppet, there were 28 made of her alone, in different sizes for different situations. Her face could be detached and replaced as needed. The prototype would be molded by a computer, and then hand-painted by the modeling department. Each jaw replacement was clipped between Coraline’s eyes, resulting in a visible line later digitally removed. There were exactly 207,336 possible face combinations for her character. Just her character! Over 130 sets were built across 52 different stages spanning 183,000 square feet – the largest set ever dedicated to this kind of film.

I like to think about the different people on the set of a movie like this. One person was in charge of making the snow (the recipe calls for both superglue and baking soda, if you’re interested; leaves are made by spraying popcorn pink and cutting it up into little pieces). Someone laid 1,300 square feet of fake fur as a stand-in for grass. Another was hired just to sit and knit the tiny sweaters worn by puppets, using knitting needles as thin as human hair. You have to really LOVE doing this to dedicate your life to knitting in miniature. Students from The Art Institute of Portland had the opportunity to help out – what an amazing induction to a burgeoning industry.

Coraline is an 11 year old girl, recently moved to a new home, and her parents have little time for her. So perhaps she can’t entirely be faulted for falling for a grass-is-greener situation when she finds a secret passageway in the new house and follows it to an alternate universe where her Other Mother is attentive and loving. Of course, all is not as it seems – the Other Mother is trying to keep her there, permanently. It’s dark, but also magical, spell-binding. It absorbs you into this world, which remains in a state of disorienting metamorphosis. The Other World seems inviting at first – utopian, even, to a young girl. But as it unravels, the world looks and feels increasingly hostile; Other Mother herself begins to wear clothing and hairstyles more forbidding and harsh. It reveals itself in a dizzying, undeniable way, the best use of the medium, an unforgettable piece of film.

If you were a fan of the series, you’re going to be a fan of Absolutely Fabulous: The Movie because it’s an absolute hoot and a real tribute to the show. If you’ve never heard of it though, you’re kind of out of luck. Show creator\writer\star Jennifer Saunders isn’t looking for converts with her script,

she’s simply paying tribute to those of us who will never get enough of Edina and Patsy.

The show wasn’t really “about” anything other than two fab women (well, fab in their own minds), PR reps Edina (Saunders) and Patsy (Joanna Lumley), who lived life in glorious, wondrous, oblivious excess. They worked little and spent lots, thinking mostly of themselves and the clothes they wore (mostly badly). Brand-obsessed and vain to their empty cores, I couldn’t help but love their ballsy hedonism. The show was vicarious fun and thanks to Saunders’s clever writing (not forgetting her brilliant partner, Dawn French), with frequent in-jokes and winks to the audience between scathing, cruel humour. The movie is very much like an expansion pack of a typical episode. This time Edina and Patsy fuck up on a world stage and for the first 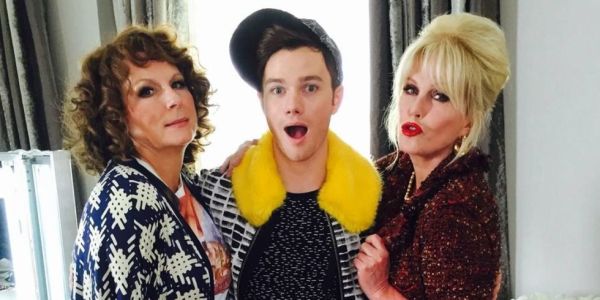 time they’re finding that perhaps being hounded by the paparazzi isn’t quite what they’d always hoped.

Saunders and Lumley have excellent chemistry (as they should – they’ve been playing these characters off and on since 1992) and just seeing them together makes me feel effervescent. Every familiar face was like unwrapping a sweet, and I couldn’t get enough. Saunders can still write a mean sting and by god can they both deliver. These comediennes are not to be underestimated: even their banal hijinks are riveting. There’s no new ground here and a movie feels a bit of a stretch, but these women truly are fabulous and I feel fortunate to still be able to bear witness to their acid. I would gladly spend my remaining years in a nursing home alongside them as long as we never ran out of champers, sweetie dahling.

What do Scarlett Johansson, Reese Witherspoon, and Matthew McConaughey all have in common? They’ve all got pipes. And boy do they use them in the new animated movie, Sing.

Picture this: a cute and cuddly koala, fuzzy in all the right places, adorably attired in a bowtie and sounding an awful lot like Matthew McConaughey. His name is Buster and his theatre is his passion. It is not, however, much of a

living. The theatre’s bankrupt. He hasn’t had a successful show in – well, maybe ever. The bank’s about to swoop in and take it from him, so in a last ditch effort to save it, he plans a singing competition.

Because his secretary is a bit of a dunce, the $1000 prize is advertised as much more, so people desperate for money as well as those desperate for fame all show up to auditions. From a talented pool he selects a chosen few: Ash, a punk porcupine with a penchant for writing her own tunes (Johansson); Johnny, a gentle gorilla trying to escape his dad’s gang (Taron Egerton);

We saw an “unfinished” version at TIFF, as a sneak peak, but to my eye Garth Jennings’s oeuvre looked pretty near polished. The truth is this film is generic and formulaic. The animation is nothing to write home about. But the songs are catchy as hell, and the talent backs it up. It’s fun. It’s fluff but it’s fun. Your kids will like it. And you may resist, but your toes will be tapping too. It’s that kind of infectious.