Woody Harrelson is making a movie based on the time he ended up in jail for a night in London. A comedy, based on “one of the worst nights of my life”, it co-stars Willie Nelson and Owen Wilson. Harrelson wrote and directed it, but 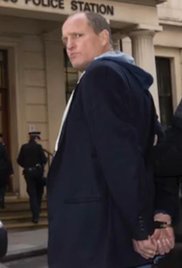 the reason the movie REALLY stands out is that it will be streamed live into theatres as he shoots it.

One night only, obviously, so mark your calendars: January 19th, 9pm EST, Lost In London will be broadcast live into about 550 theatres or so. The 100 minute movie will be shot in one take but covers 14 different locations.

“No one has ever shot a movie and live broadcast it into cinemas at the same time,” says Harrelson, and I’m inclined to believe him. “No one’s ever been that stupid — until now.”

“I’ve always loved theatre and film and wanted to find the best way to merge the two. When I decided to shoot this in real time, I realized it wasn’t quite like true theatre because the one piece missing was a live audience. By broadcasting the film live as it is being shot I hope to truly blend the excitement of live theater with the scale and scope of the film.”

13 thoughts on “Lost in London”