Carrie Fisher is dead at the age of 60. She drowned in moonlight, strangled in her own bra. That’s not remotely true, but it’s what she would have wanted me to say.

To most, she was their Princess, having played Leia in the Star Wars universe. To me,

unfamiliar with the Star Wars franchise for most of my life, she was a writer and a funny lady. She penned the semi-autobiographic Postcards From The Edge (and later, its screenplay) about her drug addiction and her relationship with her mother, Debbie Reynolds. She was also a notorious script doctor, doing uncredited polishes on other people’s scripts, including the Star Wars prequels, Hook, Sister Act, Outbreak, The Wedding Singer, Coyote Ugly, and Mr & Mrs Smith.

Then she did a one-woman show called Wishful Drinking, which has been one of my favourites, ever. She had such a great sense of humour about herself, above all else, and a keen eye for the ridiculous. Check it out:

She actually has a new book, The Princess Diarist, out just last month, based on journals she kept while she filmed the original Star Wars trilogy. You may have heard the bomb she dropped: she and Harrison Ford had an affair back in the day.

Of course you know she’d recently returned to her Star Wars roots, playing General Leia (badass warrior princess that she was) for a whole new generation. She could poke fun at 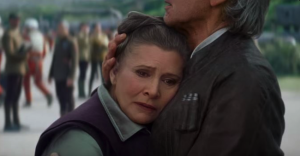 her character and her “cinnamon bun” hair style, but she clearly also has respect for the films and their fans. She recently completed work on Episode 8 and was slated to begin filming for Episode 9 this spring. No telling how they’ll treat her death in the films but safe to say it’s a blow for them as it is for us.

You may have heard that George Lucas told her on the set of the first (fourth) film that she couldn’t wear a bra under her iconic white dress. When she demanded to know why not, he famous replied “Because there’s no underwear in space.” When pressed for details, he explained “What happens is you go to space and you become weightless. So far so good, right? But then your body expands. But your bra doesn’t—so you get strangled by your own bra.” Fisher thought it had the makings of a “fanastic obit – so I tell my younger friends that no matter how I go, I want it reported that I drowned in moonlight, strangled by my own bra.”