Christine Chubbuck was a newswoman in Sarasota, Florida in 1974. Originally hired as a reporter, she was writing and hosting her own community affairs talk show, called Suncoast Digest. She took her position seriously and sought out important local officials to discuss the community. On the morning of July 15th, Christine changed things up. As her guest waited in the wings, she sat behind the news anchor desk to read aloud a statement to her live audience. It read:

“In keeping with Channel 40’s policy of bringing you the latest in ‘blood and guts’, and in living color, you are going to see another first—attempted suicide.”

She pulled out a revolver, placed it behind her right ear, and pulled the trigger. Her hair puffed up, as if from a gust of wind, and blood spattered everywhere. Chubbuck fell forward, hitting the desk with a resounding thud, and then slipped slowly out of sight. The show’s technical director went immediately to black, but the damage was done: anyone tuning in had just seen a suicide live on TV. 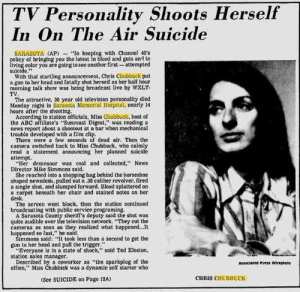 She had been depressed and spoke about suicidal feelings with her family, but never mentioned specific plans. Her mother thought her personal life was “not enough” and a recently removed ovary put pressure on Christine to find a man before it was too late and the door on her fertility closed forever.

On the bloodied desk, after Christine had been removed to hospital, was a hand-written, third-person account of her suicide, which she’d written for someone to read out as a statement. The article, written long-hand by herself, listed her condition as “critical” which makes me flinch. The prepared speech that she read out referred to the suicide as an attempted suicide. The statement lists her not as dead, but as critically wounded. Was this just an elaborate call for attention that she had every intention of surviving?

This movie is not a documentary, or at least not a straight-up one (docudrama, anyone?) and it’s the second of two films about this event that hit film festivals this year. The first, simply titled Christine, stars Rebecca Hall as Christine and Michael C. Hall as George Peter Ryan, a colleague of hers that she may have had an unrequited crush on but who was already in a relationship with Christine closest work colleague, the station’s sports reporter. This film, however, is not a straight-forward narrative. Instead, it’s more about actress Kate Lyn Sheil preparing to play the role of Christine.

Kate seems fairly genuine in her intention to portray Christine with empathy, and to not “fetishize the crazy woman” as she puts it.

The footage of Christine’s suicide has never been seen again. Lots of theories exist on where exactly this footage ended up, but it seems that the station owner Robert Nelson kept it, but removed it from the station. It seems now that his widow has passed it along to a law firm for safekeeping. No word on why it has never been destroyed. In preparing

for the role, Kate finds it nearly impossible to access any footage at all, even of the many hours in which Christine was just the normal host of a daytime talk show on local television. Christine Chubbuck has vanished. Until these movies put her into the public’s consciousness again, her death (and life) was all but forgotten.

Early on in the film, Kate muses as to whether acting is compulsive, whether the impulse to act is perhaps unhealthy for her. As the film progresses and she interviews subjects increasingly on the periphery of events, she does seem obsessive in her pursuit. But for me, it feels like this movie never becomes any one thing. It blurs all the lines but never really takes a stand. It’s a deliberately frustrating experience for the audience. When we do see random snippets from this questionable movie that they’re supposedly making, they seem disjointed and random. Were they ever really making a movie? Those parts are the least convincing in a not-very-convincing film. But watching Kate get spray-tanned and shop for thrift-store stuffed animals that Christine might have had in her own bedroom…it’s just not very edifying. I think there’s supposed to be something in here about the nature of truth, but it’s not sitting right with me. Maybe it’s because that in some disturbing way, the director is making me complicit in the society of “gawkers” which the film claims to be skewering.

Anyway, there’s a lot of navel-gazing here, so much so that this feels like a self-indulgent performance piece more than an actual movie, and the more I watch, the more I question the motives of the people making it.