Martin Scorsese and I had very different reactions whilst reading Shusaku Endo’s acclaimed novel, Silence. He thought: this will make a great movie, even if it takes me 28 years to bring it to theatres (and it did). I, however, got through the book like one gets through a prison sentence: head down, one day at a time, putting in my time, hoping it

doesn’t kill me. Having read the book, I knew exactly what we were in for with the movie, and I warned anyone who would listen, but that doesn’t mean I didn’t want to see it. It’s Scorsese. I mean, that alone is enough. But I also know that Martin Scorsese has something to say about spirituality, and if he’s gotten away from it with his last few movies, this one is a major reinvigoration of his theme.

Little Marty was friends with a loving and influential priest growing up, and this encouraged him to join a seminary to become a priest himself. Lacking a true calling to the vocation, Scorsese flunked out, but he never stopped asking himself how a priest got past his own ego, his own pride, to put the needs of his parishioners first.

In many ways, that’s exactly what the film Silence asks of its main protagonist Father Rodrigues (Andrew Garfield), a Christian missionary sent to Japan in the 1600s, when Christianity was outlawed, and his presence forbidden. He and Father Garrpe (Adam Driver), in search of their mentor Father Ferreira (Liam Neeson), make the voyage to a land unknown. They haven’t heard from him directly in years, but there are rumours that he has renounced his faith. Certain that this cannot be true, the two young missionaries vow to find and rescue him, while restoring the faith of their underground followers.

Praise be to Scorsese’s cinematographer, Rodrigo Prieto, who helps create this world with so many natural touches: fog allowed to hide and obscure, fire reminding us of the hell

that Rodrigues faces, or the hell that he’s in now. Even though the movie is relentlessly brutal, you’ll still be wowed by the images, the beauty lurking within the swamp.

Silence is uncomfortable – truly, truly uncomfortable. The tortures are otherworldly. What’s the takeaway from these 161 minutes of quiet pierced with merciless violence? Silence leaves you with more questions than answers, and how you feel about it will depend on how filled with god’s love your heart is going in. Yes it’s a meditation on religion and spirituality, but it isn’t afraid to point-blank ask us whether we’ve heard or felt god in the silence. Is he there, quietly observing his people be tortured and killed? Is he there, silently allowing persecution and murder? Does silence sow seeds of doubt?

For the most part, Scorsese seems to be fairly neutral in the plight of Christians vs. Japan. I definitely felt the strong whiff of colonization, the belief that the stories white people tell each other about their god and heaven are somehow more true than the stories the Japanese have been telling for centuries. Not just more true but The Truth. These might be 17th century problems, but they sound very familiar – almost like those same problems are here in the 21st century as well. 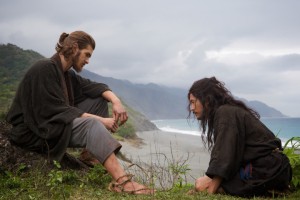 This Asshole Atheist really noticed the distinction between religion and faith – religion being something a government can choose to eradicate; faith, however, is much more difficult. Silence is really a question of belief, not just what you believe, but how strongly you believe it, how strongly you think others should believe it, how far you’re willing to go to impose those beliefs, how much pain you can endure before you abandon those beliefs. And if god himself can hide in silence, can belief dwell there also?

With Martin Scorsese at the helm, you already know this is a disciplined and wondrous exercise in film making, perhaps a masterpiece among masterpieces from this celebrated auteur. But Silence is best discussed by the feelings it evokes in the viewer. It’s meant to be thought-provoking. If god is love, is it better to love god even in the face of threat, or is it better to love our fellow man even when it means denying god? One gruesome scene marches into another, never quite glorifying the martyr, never quite condemning the oppressor. Maybe the point is that there is no point. Silence is a theological debate that grants permission to test the limits of faith, to ask the unanswerables. It is difficult to watch and difficult to process but I believe that Silence is meaningful even to the non-believer: it’s just that good a film.