1979: three women. Dorothea (Annette Bening) is an older single mother of a teenaged son who she fears is missing out on some seminal influences, so she enlists his precocious friend Julie (Elle Fanning) and her free spirit\punk photographer tenant Abbie (Greta Gerwig) to “it takes a village” him.

If 20th Century Women isn’t as concerned with being an accurate reflection of the times, it’s a fucking brilliant portraiture. The characters, expertly drawn by writer-director Mike

Mills, feel very much like real people because their problems are so distinct. The women don’t bleed into each other; they are each accorded with specific neuroses, anxieties, passions, and influences. We know a little about how they were born, and how they will die, but mostly we know how they are living. 20th Century Women is not plot-driven; nothing “happens” except truth is revealed through meticulous character study.

It helps, of course, to have Annette Bening on board. She’s the reason we’re watching. Her performance was nominated for a Golden Globe. I have been rooting all awards-season long for Natalie Portman in Jackie but having seen this, it will be difficult to go back. Bening treats this movie like a masterclass in acting. Nothing is showy or extraneous. In fact, some of her most brilliant times on screen are in perfect silence, with just the wrinkle of her brow or the droop of her shoulder or some awkward middle-aged dancing communicating all we need to know. Fanning and Gerwig are really quite good as well, but I only know that from the scenes which Bening sits out. If she’s onscreen, my eyes are glued to her. She’s always been this watchable, it’s just been a while since she’s had a role that was equal to her.

Mills’ affection for his characters is evident in their quirkiness. 20th Century Women is funnier than it has to be. Since I’m a strict non-talker at the movies, I tend to communicate approval through hand squeezes. I felt like I’d done a lot of squeezing by the end of the movie, even a little eye-catching and eyebrow lifting, which is probably moot in a dark theatre, but I was feeling magnanimous!  Sean concurred, which I think is an even 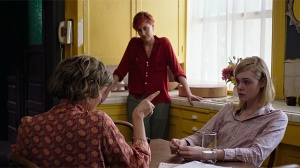 better endorsement for a film that couldn’t be further from his own experience. And that’s what’s so remarkable. Though its genius is in the details, the specificity of the characters, it’s all somehow very relatable. And any movie that’s also a mirror is definitely worth its salt.