I wanted to crawl right into the very first frame, so luscious and drenched with colour it was. If I had turned it off right then and there, I may have dreamed in technicolour and sung the film’s praises. I didn’t.

Cafe Society is a beacon of hope to all the men who have been friend-zoned. Stick around for long enough to provide the shoulder to cry on when she eventually breaks up with her boyfriend, who is cooler, more interesting, and more 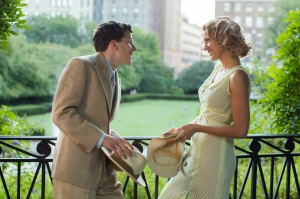 successful than you, and you might actually find her vulnerable enough to prey on her heartbreak and win. For a while. But since you’re still nerdy old you she’ll eventually wise up and leave your ass, potentially even for the ex who doesn’t deserve her, and you’ll have to content yourself with second place. If second place always looked like Blake Lively you might thank your lucky stars, but Woody Allen is an idiot, so here we are.

Bobby is the Woody-Allen-stand-in in this case, played by Jesse Eisenberg, an inspired choice because he’s already got the annoying neuroticism and concave chest. He’s not content with the similarity though, he goes full-on

impression, right down to the self-conscious body language and flighty hand gestures. Bobby moves to Hollywood, trying to escape the family business. He goes to his uncle Phil (Steve Carrell), an important guy at a big movie studio, who barely makes time for him, and pawns him off on his secretary, Vonnie (Kristen Stewart). Eisenberg and Stewart have a twitchy chemistry that works well, but it does mean you’ll have to watch the two most high-strung performances in Hollywood today. Simultaneously. In a Woody Allen movie.

Steve Carrell is the best thing about this movie, and he wasn’t supposed to be in it. He replaced Bruce Willis well into filming after Brucie was fired for being a diva and not learning his lines. The costumes are also divine. ‘Cafe society’ was coined to describe the beautiful people hanging out in night clubs, and all those beautiful people are prettily dressed and on sumptuous display. This is Woody Allen’s first digitally captured movie, and his first collaboration with cinematographer Vittorio Storaro – if he’s smart, it’ll be the first of many, because this film is gorgeous if nothing else. And yeah – nothing else. It feels like two different stories stitched inexpertly together (Allen provides the stitching – he narrates the thing, cause he just can’t keep his wrinkly hands OFF). Despite the window dressing, Cafe Society is a love story at its core, but a love story between two people you don’t really care about, and you don’t even like. The end.