Only a few minutes into Monsieur Mayonnaise, my brain’s got an itch. Something about this feels familiar but it can’t be the movie as it’s making its Canadian premiere at the Toronto Jewish Film Festival. Rather it’s the man himself, artist Philippe Mora, who I’ve lately seen in Three Days in Auschwitz, about how his mother narrowly escaped being 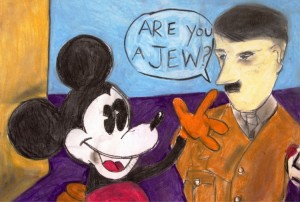 sent to Auschwitz. Philippe Mora is an artist of all mediums; while he did not direct this particular documentary, he did write and illustrate the graphic novel of the same name.

Monsieur Mayonnaise is about Mora’s father, a member of the French resistance. He earned the code name Monsieur Mayonnaise when he suggested the resistance smuggle important documents inside sloppy, mayonnaise-filled sandwiches, after he observed Nazis avoiding greasy foods in order to keep their pristine gloves clean. His father’s position allowed him to protect and shelter the family of the young woman with whom he was quickly falling in love. After the war, fearful of another, Mora’s parents fled to Australia, where they made their home, raised a family, and opened several restaurants which would feature hand-made mayonnaise prominently.

Mayonnaise, both the comic and the film. Director Trevor Graham films the madcap artist as he careens around the world, meeting up with heroes, villains, and the ordinary people still alive today because of his father’s efforts – teamwork improbably involving Marcel Marceau – smuggling Jewish children across the border.

Mora is practically a subject unto himself, and if his flightiness is mirrored in the documentary, so too is his exuberance.

You can catch a screening of this film on the following dates:

Thursday 11 May, 3:30 PM – Alliance Francaise (Director Trevor Graham will Skype in for a Q&A)