Veronica (Oh) is the wife of a wealthy businessman. She drinks too much and spouts dream-crushing advice to her teenage son. The marriage is unhappy. Ashley (Heche) is 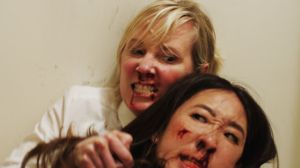 an artist who can’t sell her stuff because it’s bleak and full of rage. The two meet up years and years later, as Ashley is passing hors d’oeuvres for her caterer wife (Alicia Silverstone) at a fancy event Veronica attends with her husband. They are immediately hostile. Things escalate to the point of – you guessed it – a catfight. It’s pretty fucking brutal and it has some life-changing consequences.

One of these women is entitled and superficial while the other is entirely self-obsessed. There will be no chance of sympathy for either. They’re awful people. And it’s hard to enjoy a fight when you’re not really rooting for one person over the other. I took an instant dislike to the film because the characters felt so unrealistic to me and I hate to see women portrayed so unfairly.

This is supposed to be a black comedy and it IS black (and blue) but not very funny. It mostly felt degrading. I even object to the title, which is a sexist piece of shit term that I do not condone. And a bright spot provided by Titus Burgess as a physical therapist isn’t near enough to make this thing bearable (nor does he approach the fabulous heights he achieves regularly on The Unbreakable Kimmy Schmidt). There is no character arc to redeem them. The only real takeaway from this film is that perhaps misogynist director Onur Tukel should be sent into therapy for a very long time. He sets their fight to circus music, making the women a sideshow, their pain a farce.