Writer-director Martin McDonagh has almost certainly reached the peak of his film making career with this film. It doesn’t get much better than this.

The three billboards in question have been rented by grieving mother Mildred Hayes (Frances McDormand) to accuse the town sheriff, Chief Willoughby (Woody Harrelson) of not having made any progress on the case since her daughter was brutally raped and murdered. Willoughby isn’t terribly pleased, but he’s got more important things to worry about – namely, terminal cancer. So it’s his racist, hotheaded, cruel officer Dixon (Sam Rockwell) who takes up his cause, torturing anyone he suspects of having helped. 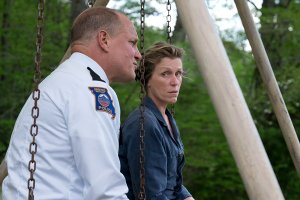 McDonagh uses lyrical language peppered with inspired cursewords; his heavy-weight cast punches it up with a surprising mixture of gravitas and black comedy.

Frances McDormand, national treasure, is of course fantastico. Wearing her ubiquitous coverall, she’s a no-nonsense woman who’s been through hell even before her daughter’s gruesome death. She is not without a softer side, though rarely seen. McDonagh gave her a couple of speeches that practically earned standing ovations at our screening. She walks a thin line between vengeance and justice but discovers she is not exempt herself. She’s got a terrific scene pitted against Willoughby that suggests these two have more history than we’re privy to. It’s a small town; there’s almost no vitriol without at least a measure of respect. As Willoughby, Harrelson once again reminds us he’s capable of almost anything. But, arguably, the man to watch is Sam Rockwell. He’s hateful, detestable, and yet we don’t quite hate him or detest him as we should. That’s sort of the miracle of McDonagh’s script – all of his characters are deeply flawed. Mildred is our protagonist but she’s no one’s hero. She makes too many mistakes. Dixon is all mistakes but for a small sliver of charm, and Rockwell exploits the hell out of it. He’s almost maniacal at times, and loads of fun to watch. Any time any of these power houses square off verbally, they’re shooting spitfire, and it’s even more entertaining to watch than a good old fashioned shoot out. And that’s not even mentioning a very capable stable of secondary characters that add dimensionality to the population of this small, insular town.

McDonagh’s world is not one of easy outs. It feels like he has asked himself – what would be most surprising here – and yet, despite a plot that constantly feels like it’s developing from the left field, it feels right.

I fully expect to see McDormand’s name on the Oscar ballot this year, in a race for Best Actress that’s already crowded (she’s the third name I’ve tossed out this festival alone). But Rockwell’s belongs there too – this is what Best Supporting aspires to be. Although conventionally shot, this is an extraordinary film, one I hope you’ll see and love when it comes out this November.