I have good news. Big news. Blockers comes out April 6 and it’s actually a super funny comedy. I don’t think I’ve laughed this hard since Bridesmaids.

It’s about 3 young women at the end of their high school career. Graduation and college await them, but for now: prom. And more importantly, prom sex. 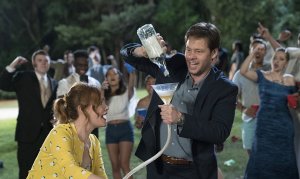 assert themselves sexually. All the usual bullshit about female virginity is thrown into the gutter with other outdated notions like the earth is flat, and bloodletting as a cure-all. These ladies are real, raw, and raunchy when it comes to sex, which, sure, is refreshing, and that’s nice and all, but the truth is we wouldn’t give a damn about myth-busting if it wasn’t entertaining, and this movie captures that elusive comedy magic and makes its audience howl with laughter.

Now, the girls may be ready to shed their prom dresses and their hymens, but their parents are not quite as happy with this little sex pact. Leslie Mann, John Cena, and Ike Barinholtz play the parents on a mission to stop the sex from happening. On prom night they’re hoping to be cock blockers, and they’ll go to stunning and humiliating lengths to block those cocks, but maybe in their heart of hearts, it’s the growing up and saying goodbye they’re trying to block as well.

Of course the movie inevitably tackles our dear old friend the double standard, and actively wonders how we can ever hope to achieve equality for women when even their own parents don’t treat them that way. But this is no issues movie, it’s a goddamn comedy, and rated R, a strong R, because it’s rude, crude, and full of franks and beans.

Female sexuality, especially that of a teenage girl, is rarely if ever treated this way and it’ll make you stand up and cheer for how empowering it feels to watch this. Is this the female American Pie? Fuck no. It’s funnier and smarter and 1000% less juvenile. But this movie isn’t just about fierce females, it’s also about their feminist boyfriends/boy friends. Boys who are in to consent, who stop when asked, who take cues from their partners and respect them. And it manages to do this casually, no big deal, like this is just how it is BECAUSE IT’S DAMN WELL HOW IT SHOULD BE. And it never stops being funny. Disguised by vulgarity, this movie is actually showing us how to behave. Except for the butt-chugging. I’m pretty sure we should stay the hell away from that.