First of all, I don’t like punctuation in movie titles.

Second, it’s possible that I both consciously repressed having watched this film on Friday night and unconsciously blamed Sean for having made me watch it all weekend long. And I’ve only just made that connection in the cold, cold light of Monday morning.

Alex, Darren, and Joel are members of the self-styled “dude crew” – which is just 3 weird guys who are hotel maids. Which, since we’re on the topic, in what universe does it take 3 maids to clean one room? Well, the same universe that employs 3 white men instead of 1 brown woman I suppose. But anyway, with Daniel Stern running the hotel, I suppose this flimsy premise isn’t the most unbelievable thing that’s going to happen in the next hour and a half.

So anyway. Bae, some billionaire’s son, is visiting the hotel which means two things: a) the stoner maids are going to pitch him their video game idea because they sure aren’t busy cleaning any rooms or anything, and b) Bae’s own security team is going to hold him and a whole bunch of other hotel guests hostage for money and the love of explosions. Will Alex (Adam Devine), Darren (Anders Holm) and Joel (Blake 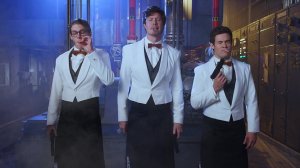 Anderson) step up and save the day? Haha, no. Not even close. Not even unintentionally. I mean, they’ll mistakenly believe in their own hero potential at times (I extrapolate this from the slow-motion hero walks they do down dingy hotel hallways) but they’re never sober enough, smart enough, or organized enough to get shit done. But don’t worry for a single second that there won’t be enough bone-headed antics to go around: there will be blood. And guts. And digits and limbs and pieces of face sprayed all over this damn hotel.

These are the same idiots who brought you Workaholics for 7 agonizing seasons, so if you think that’s funny, this movie will provide you more of the same. But if your tolerance for lowbrow bro humour is as nonexistent as mine, and you like your movies to make sense, and baffling b-list cameos don’t impress you  much, and you’ve never been all that curious about human cheek prosciutto, then Game Over, Man! should be a hard pass for you as it should have been for me.