In my opinion, the Hotel Transylvania franchise is completely devoid of charm, wit, imagination, or life. It’s the barest of bare minimums. It treats children like nitwits and may actually be worsening their little attention spans by assuming they have none.

But if your kids are already attached to this hotel full of monsters, chances are you’re going to have to sit through this one too, so here’s what you’re dealing with: Drac (a vampire voiced by Adam Sandler) manages a hotel for monsters. His daughter Mavis (Selena Gomez) shocked the monster community by marrying a human, Johnny (Andy Samberg) and producing a half-human, half-dracula child they inexplicably named Dennis. So that’s basically the first two movies, distilled into two sentences, and let’s face 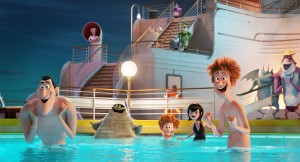 it, with some clever punctuation, it could have been just the one. Anyway. The hotel is populated by various monsters such as Frankenstein (Kevin James) and his lovely wife Eunice (Fran Drescher), Mr & Mrs Werewolf (Steve Buscemi and Molly Shannon), the invisible man (David Spade), and a mummy called Murray (Keegan-Michael Key). And in this third installment, Mavis gets it in her head that her dad has devoted his life to perfecting other people’s vacations and deserves one of his own. So somehow the whole gang schleps off to a monster cruise, helmed by the beautiful captain Ericka (Kathryn Hahn). Only problem is: Drac has already “zinged” once (“zing” being the monster version of love at first sight, and true love forever, and love being once in a lifetime). So he’s nervous about it, and Mavis is unexpected not that cool with it. But even more worryingly, Drac’s old nemesis Van Helsing (Jim Gaffigan) might still be after him after decades of cat and mouse. So that’s disappointing.

Spelling it out like this actually makes it seem like this movie has a plot, and I guess it does in the very vaguest of terms. But plot in this case is just filler in between out of the blue musical numbers \ dance sequences where it is clear that a) Sony isn’t shelling out for good or current music and b) the animators are super duper lazy and praying we won’t notice.

Anyway, Hotel Transylvania is as big a snore as the first and second. The only thing it has going for it is a giant puppy named Tinkles, even though he’s criminally and surprisingly effectively disguised by a small hat for most of the movie (which manages to confound all of the grown-ups until it falls off and his true identity is revealed). I was never in danger of laughing. I had low expectations for this movie and it met them – good thing it was the only thing playing at the drive-in.