Bianca Del Rio is the drag name and alter ego of Roy Haylock, who won the 6th season of RuPaul’s Drag Race. Acerbically funny, Bianca went on to star in her own movie where her razor-sharp barbs cut up a classroom. If you missed my review of Hurricane Bianca, high school teacher Richard (Haylock) is fired in small-town Texas for being gay. Richard returns to the school as Bianca, and becomes teacher of the year. But Principal Deborah (Rachel Dratch) is suspicious, and with grudges against both Richard AND Bianca, she sets out to destroy either one. Of course, with some skeletons in her own closet, she probably shouldn’t go poking at the wigs and padding in someone else’s. Let’s just say the movie ends with Deborah being sent to jail.

Cut to: Hurricane Bianca the sequel. Deborah’s out of jail and mad as hell. Richard has 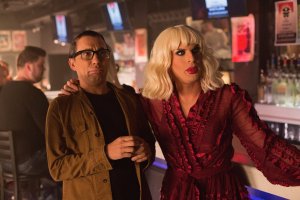 retired Bianca but is still teaching in Texas. He should probably be a lot more suspicious when he gets a letter in the mail saying he won a contest he never entered – a contest whose cash prize only Bianca can pick up. In Russia. Deborah of course has heard it’s illegal to be gay in Russia and figures the Russians will just do the dirty work for her, and she’s probably not wrong.

Hurricane Bianca: From Russian With Hate is peppered with cameos from faces you’ll recognize and drag queens you’ll love (including D.J. “Shangela” Pierce, back again, and actually quite a natural). And Bianca gets a new sidekick named Rex (Doug Plaut, a scene-stealing weirdo).

If you liked the first, this one’s as deliciously snarky. When jokes land, they land like death drops. This is dark comedy realness, a Russian whore extravaganza eleganza, and if you don’t love it I don’t know how in the hell you’re gonna love yourself.

8 thoughts on “Hurricane Bianca: From Russia With Hate”