Owen (Kyle Harvey) is known as Oh! when he’s rapping, and he’s hoping that as his high school career wraps up, his rap career will take off. For now, he’s working at his dad’s burrito shop. His best friend Jeff (Harrison Holzer) is acting as his “manager”, getting whatever amateur\talent show gigs for his bud that he can. But then something amazing happens: Wiz Khalifa turns up at one of his shows, and brings party favours. Which seems like the best thing ever until Oh! projectile-vomits on Wiz during the show, and collapses into a seizure on stage. It’s 2018 so that shit goes viral, and pretty soon Oh! is still a nobody but “Seizure Boy” becomes a laughing stock, even sparking a (very insensitive) dance craze. 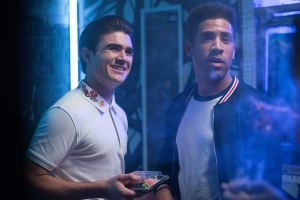 Discouraged, Owen decides to join the Marines, and Jeff has one last night, a French Montana concert and its after party, to get Oh! in front of the right executive and secure him the deal that will save him from his broken dreams.

I have a feeling The After Party is supposed to be a fun ride but oh my god I hated it. Possibly because of Jeff, who was often in the driver’s seat. What a terrible human being. Casual narcissism and misogyny aren’t much fun to watch, especially when no one acknowledges his flaws. His $800 jeans are allowed to stand in lieu of personality. But Jeff isn’t my only beef, he’s just the beefiest.

There’s also a cheesy, contrived plot that relies on this friendship when the script makes it awfully hard to believe in. And makes it hard to root for these two knuckleheads. And I often found myself wondering who this movie is for – there are eye-rolling and probably already out-dated references to dubstep and Venmo meant to establish some youth cred, but alongside  cameos from Rakim and DMX, it feels like maybe the film makers aren’t sure which demographic they’re trying to appeal to. Frankly, when we have Donald Glover’s rapper-manager dynamic in Atlanta for comparison, The After Party just doesn’t stack up. It feels forced, superficial, and not particularly grounded in reality. Despite some recognizable rap faces, The After Party is just another annoying, uninspired, raunchy teen comedy in a  hip-hop costume. If this was on a mix tape, you’d have a free pass to fast forward through it every time. Hard skip.

12 thoughts on “The After Party”