The Ballad of Buster Scruggs is actually 6 distinct stories. The first one opens in spectacular fashion, Buster(Tim Blake Nelson) mounted on his horse, strumming his guitar, his pleasing singing voice echoing off the mountains around him. When he rides into town, he lives up to the second part of his illustrious reputation: he’s the best gun slinger in town. And indeed. no matter how jaded a western, shoot em up, action hero connoisseur you are, Buster has some moves that will impress you. This opening vignette sets such a strong tone, and an enjoyable one, that its abrupt shift left me confused and grief-stricken, and maybe even bored.

We turned the movie off halfway through. But that opening part really stayed with me. It did such a good job establishing the movie as one to watch that  I succumbed to the 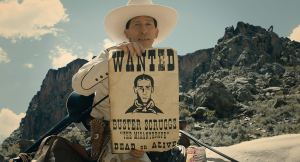 pressure and made attempt #2 the next night. I rewound to the beginning and what I found was: yes, the switch between the first and second chapter is brusque, and because for me unexpected, I had lost interest when I failed to keep up. In this second portion, James Franco is a bank robber who gets the ultimate sentence for his crime. Our first extended look at his face is perhaps one of the most striking portraits of a man I’ve ever seen on film. The editing is astonishingly economical: the story is told not so much quickly as efficiently. But during my second watch, with all guns firing, not only was I less confused, I was incredibly impressed.

Joel and Ethan Cohen know what the hell they’re doing. If their movie isn’t speaking to me, I should damn well know that it isn’t their failing as writer-directors, but mine as a viewer. Subsequent chapters star the likes of Liam Neeson, Tom Waits, and Zoe Kazan. They all tell their own stories about brutal and unforgiving life in the Old West.

The Coen Brothers have been at this a long time yet they’ve still got the ability to surprise. Their brevity inspires them to experiment in yet more ways, crafting stories that are compelling exhibitions of their dark humour and signature style. Did I like this movie? No. I fecking loved it. It took me two tries to get there mind you, but it was fecking worth it.

16 thoughts on “The Ballad of Buster Scruggs”