Hope is a high school student dying of cancer. She’s got a Make-A-Wish boyfriend, an F-average, and a social media presence that’s based solely on her disease. None of that matters because she’s terminal. But being terminal gets her attention, and flowers, and cupcakes. It means the popular girls at school know her name. So when she suddenly goes into remission, can you really blame her if she’s reluctant to tell people? She’s been Cancer Girl since she was 12; Hope doesn’t know how to navigate the world as a normal person. She wasn’t supposed to need to.

It turns out, things get kind of murky when you allow people to believe that you’re dying 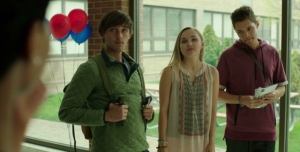 when actually, you aren’t. And things are already a little slippery because Hope attended school like she never had to worry about graduating, and now suddenly, she does. And her boyfriend committed to her like it was a very short-term commitment and now that it’s open-ended, the passion has pretty much fizzled out.

The thing about all these movies about young, cancer patients is, they tend to make heroes out of the dying. But cancer doesn’t make you a good person, or smarter than your peers, and it doesn’t magically bypass those awkward teenage years. Hope Springs Eternal gets this right. It’s not trying to fuck you up with forced tears and emotional manipulation. Hope is a nice enough kid, but cancer has made her selfish. She is not a saint, and that’s a powerful cinematic temptation. Cancer has also become her only real identity, so I don’t blame her for being disoriented when that’s taken away. Although remission is usually a positive thing, for Hope it’s a little more complicated. High school is such a vulnerable time, especially for young girls, and there isn’t exactly a manual on how to survive surviving.

Mia Rose Frampton, daughter of Peter Frampton, is luminous and very watchable. The rest of the cast is a little more hit and miss, but oh the whole it’s a sweet little movie, a touch of Eighth Grade and a touch of The Fault In Our Stars, a smidge of Mean Girls, but mostly its own little thing, post-cancer, full-life.