Snow White and the Seven Dwarfs is a movie as old as my grandmother. Snow was renowned for her beauty and charm, and a mouthy mirror made the mistake of saying

as much to Snow’s step-mother, whose ego couldn’t handle the truth. So Snow White fled to the forest, where she befriended a group of miners. It wasn’t enough to save her, though, the Queen is evil but she’s good with follow-through, you have to give her that. She stalks Snow through the woods in a very convincing crone costume and a poisoned apple – one bite, and Snow falls into a coma, to be wakened only by true love’s kiss. Which is creepy, absolutely, but let’s not forget we live in a society where people marry murderers after exchanging pornographic letters with them in prison, so comparatively, falling in love with a woman who is beautiful AND never tells you to pick up your socks? She’s perfect! This movie was huge for Disney. It was huge, period. It made 4 times as much money as any other film that year, attracting audience members of all ages – though after its engagement ended at Radio City Music Hall, all the chairs had to be re-upholstered because the forest sequence proved pants-wettingly frightening to small children. 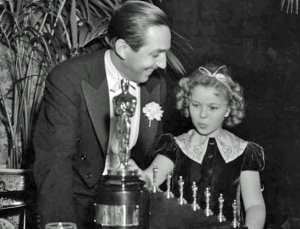 “as a significant screen innovation which has charmed millions and pioneered a great new entertainment field”. Disney received a full-size Oscar statuette and 7 miniature ones, presented to him by 10-year-old Shirley Temple.

In 1950, Disney hadn’t had a hit since Snow White, way back in 1937. The studio was up to its mouse ears in debt, and Cinderella, at a cost of 3 million to make, was a huge gamble. Had it failed at the box office, Disney Studios would have been sunk. Imagine living without Disney’s legacy, without the magic of whichever of its movies you grew up on. Luckily, Cinderella was a milestone in Disney’s filmography. It garnered 3 Oscar nominations and was the 3rd highest grossing film of the year, after King Solomon’s Mine and All About Eve. Between box office receipts, music sales, and merchandising, Disney had enough cash to finance a whole slate of new films, start up its own distribution company, get into TV, and start building Disneyland.

This week, Sean and I are at Disney World, and the first thing you see in Magic Kingdom, the very symbol of the park and of the company itself, is Cinderella’s Castle. That movie is nearly 70 years old but it was Disney’s rags to riches story. In 2018, Disney reported a revenue of 59.43 billion USD, and it was Cinderella who saved their sorry asses from bankruptcy. And don’t you just love the feminist bent of referring to it as Cinderella’s Castle? Bitch just moved in yesterday, but she stormed that castle like Jackie O took the White House. I can only hope we start referring to Buckingham Palace as Megnan Markle’s Castle.

At the park, you can walk through her 189′ tall castle (it looks taller thanks to forced perspective trickery), enjoying its soaring spires, ornate turrets, its tranquil moat, and the wishing well surrounded by rose bushes. Within the castle corridor, you’ll see 5 handcrafted mosaic murals containing 14-karat gold and silver plus over a million pieces of glass in 500 different colours that tell the classic Cinderella story. If you’re looking for a little luxury, you can have a real princess experience by dining inside the caste, at the

royal table, with princesses (which, yes, okay, I admit I will be doing this tonight). OR, if you’ve got a little girl who wants to be a princess herself, there’s the Bibbidi Bobbidi Boutique, a spa where fairy godmothers will do hair, makeup, and nails for little girls ages 3-12 (and where you can of course pick up a princess dress, at an additional additional cost). Which is unfair, because I’m like, a quarter past 12 or something ridiculous, and they do not cater to little big girls such as myself. However, they do have a character couture experience at Disney spas, where even I can have my hair, makeup, and nails done, inspired by the character of my choice – so if you’re feeling a little more Ursula than Ariel, that’s cool too. The truth is, while children are encouraged to come to the parks dressed as their favourite characters, adults are forbidden to wear costumes at Disney. Disney really wants to preserve the magic, and it just wouldn’t do to have 2 Cinderellas wandering around, and certainly not a sub-par Cinderella wearing Crocs instead of glass slippers under her gown, and who’s a little pink in the face from lining up for rides in the hot sun all day long. If Sean was feeling extra romantic, you can up the ante at the royal table by having a glass slipper presented on a bed of roses waiting for your sweetheart at your table. Or even a chocolate glass slipper. Or a tiara. Or a scepter and a royal proclamation. Yes, really. Disney leaves no stone unturned in the quest to part us from our money.