Mattie Ross (Hailee Steinfeld) is just 14 years old when her father is murdered by the coward Tom Chaney. It should not fall to her to avenge his murder, but it does, and Mattie proves more than up to the challenge. Though not particularly skilled with guns or wilderness, she and her quick wit are nonetheless game when both are required as the search for Chaney takes her into Indian land. She hires Rooster Cogburn (Jeff Bridges), supposedly a man of true grit, to get the job done; Rooster is none too pleased to find a little girl as his sidekick, but the money’s too good to turn down. Mattie, however, is the one who ends up disappointed when she quickly learns that Rooster is a slothful drunk. Neither is she pleased when Texas Ranger LaBoeuf (Matt Damon) joins the fray – he’s after Chaney (Josh Brolin) for his own ends, but Mattie insists that he will hang for no other crime but her own father’s murder. It’s a fine point, perhaps a moot one, but to Mattie, it’s the whole point. 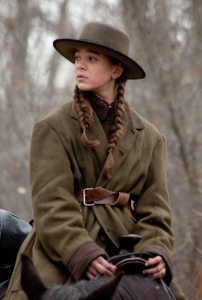 1825 was not a great time to be female. LaBoeuf feels entitled to both kiss and spank Mattie, a 14 year old girl mind you, at his will and against hers. Most other men just discount her completely. But this is a story of true grit, and so it must involve a woman. Joel and Ethan Cohen edge the spotlight over to Mattie, where it belongs, which is what makes this film even stronger than the original. Which is not to say that Rooster and LaBoeuf are lost. Indeed they are not. The Cohens can write like the dickens (or, perhaps, like Dickens), and they’ve found a way to sharpen up a very interesting little triangle. Hailee Steinfeld was 13 when she was cast, but she acts alongside of Damon and Bridges like a gun toting, horse riding champ, and it earned her an Oscar nomination (which she lost, of course – True Grit got 10 nominations and 0 wins, which is what the french call “not right.)

True Grit is gritty, but it’s beautifully made. I love the snappy, tongue-twisting, quotable script, I love Roger Deakins’ gorgeous cinematography, I love the actual wild of the wild west, I love the slapdash feel of the gun fights, I love the sound of beans cooking in their can, I love the gleaming buckles on Matt Damon’s hat and the way he talks after losing his tongue. It feels improbable, and maybe even impossible, that you could take a beloved American classic and actually improve upon it, but credit the Cohens – they have, and they’ve made it look effortless.