Four very different sisters reunite in Madrid for the first time in years upon their mother’s death. A series of profusely weeping men make displays of themselves at her funeral. The next day, at the reading of the will, the four sisters learn that the man who raised them is not their biological father, and that their fathers may be four different men, any or none of the weeping funeral goers. In order to obtain their inheritance, they have to go on a wild goose chase to find their parentage.

The premise is wacky but they play is straight. Or, as straight as possible when the characters are all ridiculous caricatures. Well, the lucky ones anyway. Some of them don’t even get drawn with wild but general cliches. There’s the French artist, the blind priest, and perhaps worst of all, the man with dementia.

The sisters, meanwhile, get an even worse treatment. Claudia (Belen Cuesta) is uptight, 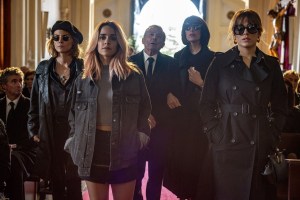 and her marriage is failing. Sara (Blanca Suarez) is an important New York City businesswoman who left behind her true love, Sofia (Amaia Salamanca) is a lesbian with commitment issues, Lucia (Macarena García) is the baby.

So it’s like Mama Mia, except it’s a funeral, not a wedding, and there’s no singing or dancing or Meryl Streep or reasons to watch. Did I enjoy this movie? Evidently not. I veered from bored to skeptical to mildly offended. Plus there’s the issue of dubbing, which unfortunately is always an issue, one I should probably stop complaining about since it saves me reading subtitles. I don’t mind a subtitled movie at the theatre, in fact my ADD probably embraces it, but at home I’m never just watching a movie – I’m watching a movie and and and and. Which keeps my energy in check and my mind focused enough to absorb things and not get bored. Subtitles make it hard to multi-task. But dubbing makes it hard to take a movie seriously. The lips don’t match! They never match! Still, I can’t help but admire the people who work on these translations – you have not to just turn Spanish into English, but distill the essence of what’s being said into the same amount of syllables, which many languages would make very challenging. Of course it’s a bad sign for a movie when I’m mostly just thinking about how hard it would be to fit all those words and meanings into a set cadence. And from what I’ve seen, Netflix is springing for real professionals, not those TV movie of the week people who keep speaking long after lips stop moving. But back to the movie: should you watch it? No. There are roughly 5500 titles on Netflix – Canada’s Netflix catalogue is third largest in the world, behind Japan and America. So there’s really no excuse. You’re not that desperate.

3 thoughts on “Despite Everything”