Nick Carraway meant to be a writer but is lured by the temptation of easy money to New York City for work, and a shack to stay in outside the city, on Long Island. He’s sandwiched between mansions, and across the bay dwells the old money, including his cousin Daisy Buchanan and her husband Tom. But everyone’s gossiping about Nick’s mysterious neighbour, Jay Gatsby.

There’s almost no one more suited to the decadence of The Great Gatsby than director Baz Luhrmann. Certainly Gatsby’s epic parties, brimming with booze, booming music, and beaded dresses, are brought to life with enthusiasm and an orgasmic level of detail under his direction.

But F. Scott Fitzgerald’s seminal novel isn’t just about the excess, but its flip side as well, the roaring/rotten 20s, the social upheaval and the resistance to change. But maybe a novel as ambitious as this, a book that has spoken to us for generations, belongs strictly to the page. Because as much as Baz Luhrmann gets right, the movie never quite grabs you the way it’s meant to. The way it should. Sean is a philistine who’s never actually read the novel (gasp!) and I wonder how his experience of the film differs from mine. For that matter, his experience of life.

Gatsby, you see, is the mysterious figure who haunts the pages of Fitzgerald’s genius work, but in the film, he’s all too knowable, especially when navigated by Leonardo DiCaprio, a muse of Luhrmann’s and an extremely familiar face to American moviegoers. And Tobey Maguire was already over when Luhrmann cast him as Carraway, the news just hadn’t quite made it to Australia yet. But Carey Mulligan as the luminous, quintessential, ethereal Daisy Buchanan? That was right. Inspired, even.

The best thing about this movie is and always has been Jay-Z’s genre-defying soundtrack. Luhrmann is no stranger to pairing period films with modern music to dazzling effect, but hip hop fits 1924 like it was always there, nestled between the cigarette holders and the champagne fountains and the bobbed haircuts. The costumes are a close second of course, every woman dripping with pearls and jet beads and scandalously raised hemlines. The accoutrements are perfection, so right that they almost distract from the fact that the movie itself is just wrong. And it’s not that anyone could have done it better. It’s probably just that no one should have even tried.

Not all dance movies are created equal.

Although I was a graceful and gifted dancer myself, when I was three and thought tutus were the object of pure happiness, I cannot confess to a love of ballet (although I recently took one in at the Nation Arts Centre, based on Margaret Atwood’s dystopian sci-fi novel The Handmaid’s Tale, which was exactly as bad as it sounds) or of ballet movies. I watched The Turning Point with an almost open mind because Anne Bancroft! Shirley MacLaine! But still I felt

overwhelmingly meh. I mean, the dynamic between the two women was pretty great. Shirley MacLaine was a ballerina herself but she gave it up to marry and have children (and possibly to prove that her dancer boyfriend wasn’t gay). Her friend has the career she always envisioned for herself, but now that the friend is getting older, she’s also getting edged out of the company (and by Shirley MacLaine’s daughter, irony of ironies). So both have regret, both sort of envy the other’s life. But there’s just an awful lot of ballet in there (excerpts from 7). For fans of Sex and the City, it’s kind of fun to see Carrie’s Russian do the thing we always knew he did, but the novelty wore off for me quickly and it just kept going (although also interesting that SJP is a mainstay of these dance movies as well!)

Girls Just Want To Have Fun is the SJP movie you forget to be glad you’ve never seen. You haven’t seen it, have you? She plays this kid who’s new in town and wants nothing more than to make it on “Dance TV” so her new friend Helen Hunt (who apparently always sounded like somebody’s 40ish bitter ex-wife) convinces her to try out. Turns out she’s a dancer AND a 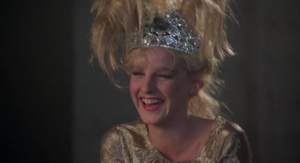 gymnast, which means there’s going to be some truly putrid body double work each and every time her character decides to turn a cart-wheel – and she decides it A LOT. Oh the leotards, the leg warmers, the big hair, and Helen Hunt’s pineapple earrings. Oh, and a 12 year old Shannen Doherty before she got her Hollywood teeth. What’s not to love? Everything! Everything is not to love, but especially the title, which bears no relation to the film, other than wanting to use the song, but not the actual Cyndi Lauper version, which might have made sense. This girl just wanted it to end.

Baz Luhrmann likes to call Strictly Ballroom the first in his Red Curtain trilogy (along with Romeo + Juliet, and Moulin Rouge!) but if you’re expecting anything like those other movies, boy are you

in for some stinging disappointment. No recognizable actors, no recognizable tunes. It’s just a generic ugly duckling story, but will boring ballroom dancing. A plain novice dancer pairs up with an experienced but experimental dancer to win a championship that their unorthodox moves render them technically ineligible for. And if you think regular ballroom dancing’s boring, wait until the power goes out and the music fails. Sean fell totally and completely asleep.

First Position is a documentary I caught on Netflix. I actually quite enjoyed it as it follows young ballet dancers trying to get noticed by prestigious schools and dance companies. I was particularly struck by the parents – sure there are your typical dance moms who cry at the very

thought of their kids choosing childhood over ballet, but there’s also a dad who took a 6 month tour of duty in Iraq rather than a 2 year stint on a naval base where his son wouldn’t be able to train, and a mother who stays up late dyeing the “flesh” coloured parts of her daughter’s costumes brown, to match her skin. These kids are super dedicated and we see a lot of the sacrifices their families make to get them where they are, but in this case I might argue that we didn’t see enough ballet – or at least not enough to understand why some failed while others succeeded.

Happy love day, everyone! Whether single or otherwise engaged, Valentine’s day is a great day to curl up under a fuzzy, warm blanket and have a cozy day (or night) watching movies that make you believe in love. Today I’m writing about Moulin Rouge!, not just because it’s a great love story, but because Sean and I are in Paris and to celebrate our own VD, we’re taking in a show at the actual Moulin Rouge! Located in the Pigalle section of Montmartre, it was the birth place of the can-can, a seductive dance done by courtesans with split knickers. It was a place where the rich could “slum it” in a safe and fashionable district. And yes, they really had a huge elephant statue right in the middle of the garden, just like in the movie. This past October it celebrated its 125th anniversary. Even the movie is aging – can you believe it’s already 14 years old?

Filming was halted for two weeks in November 1999 after Nicole Kidman fractured two ribs and hurt her knee while rehearsing a dance routine for the movie. If she’s being filmed from the chest up, it’s probably because she’s sitting in a wheelchair.

The necklace worn by Satine was made of real diamonds and platinum and was the most expensive piece of jewelery ever specifically made for a film – wowza! The Stefano Canturi necklace was made with 1,308 diamonds (!), weighing a total of 134 carats and was worth an estimated cool million.

Originally, the green fairy was going to be a long-haired muscly guy , which Ozzy Osbourne was tapped to voice. Obviously it was changed along the way to the current “Tinker Bell” incarnation, played by the fabulous Kylie Minogue, but Osbourne still gives voice to the fairy’s guttural scream when it turns evil. How cool is that?

The movie was shot largely at Fox Studios in Sydney, Australia, with no location filming at all, which means the Paris landscape was digitally produced and the two longest visual effects shots (as of 2001) appear in this film. So while famously Parisian, it’s also famously fake.

However you’re celebrating today, and even if you’re not celebrating at all, I wish you love, happiness, popcorn, and movies. I’m off to the Moulin Rouge with my sweetie, and I’ll let you know if they still wear the split knickers 😉 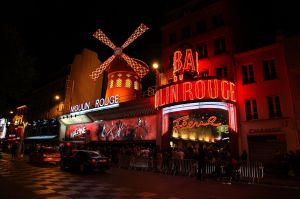