Let me ask you a question: are you a sack of shit? Yeah, I didn’t think so. In that case, it’s pretty safe to say you’ll find this movie enjoyable. Like the first one, it’s not going to rock your world. It’s not going to usher in a new era of animation. It’s not a story that will be passed down generation to generation. It’s a just-funny-enough, tug-on-the-old-heartstrings, relate to humans through their better counterparts kind of thing.

The best kinds of people are dogs. That is a FACT.

Max (this time voiced by Patton Oswalt rather than the sex offender Louis C,K.), the very good boy from the first film, is back again. He and his very good boy brudder Duke (Eric Stonestreet) are welcoming yet another new addition to their family: a human baby named Liam. Yes, owner Katie (Ellie Kemper) has met and married a human man and produced an heir. We still don’t know what it is that Katie does to afford her very nice Manhattan apartment, but her life is very full. And Max, initially quite ambivalent about human children, grows to love Liam very very much. The feeling is mutual. But just loving Liam is not enough; Max feels he must protect him from the world. Max, normally a happy-go-lucky dog, is now a bit of a nervous nelly. The behaviourist outfits him with a cone of shame, and then his owners pack him off to the farm. Oh gosh, not the proverbial farm, an actual farm, where he meets rough and tough farm dog Rooster (Harrison Ford), who is determined to cure him with tough love and hard work.

Meanwhile, back in the city, old friends are up to new tricks. Fuzzy bunny Snowball (Kevin Hart) is helping new pal Daisy (Tiffany Haddish) to, believe it or not, rescue a tiger from a circus. And sweet little fluffball Gidget (Jenny Slate) has her own little rescue mission going, and enlists Chloe the cat (Lake Bell) for her particular brand of expertise.

This movie caught me right in the feels on at least to parts: a) My sister had a lovely good boy, also named Max, who got a little “overprotective” during her pregnancy, and through the birth of her first child, and he had to go to the proverbial farm. We all miss him to this day. b) My own little Fudgie is himself a bit of a nervous nelly and is newly on anti-anxiety meds actually called Clomicalm. He is not yet calm, but he is definitely not unhappy. He mostly worries about stupid stuff like: am I posing with my toy in exactly the right way to impress Sean when he comes in? How about now? How bout now? Now? NOWWW????

And of course, as pet owners generally and dog lovers specifically, and people who are just plain old not monsters, you can’t help but melt a little when you recognize a bit of your own four legged friend up on the screen. When Daisy made her mad face, I saw my Herbie. And when Max learned how to howl, I heard my Bronx (though Bronx does more of an “Awuuuuu.”)

So no, it’s not a terrific film. But it’s a sweet film, a cute film, it’s the film I wanted to see tonight and I’m glad I did. Awuuuuuu.

Megan panics when her boyfriend of 10 years proposes to her at a friend’s wedding, but really it’s what she’s been waiting for – not so much for the ring, but for someone to just decide for her. With her post-graduate studies complete, she’s still without a job, still waffling on her daddy’s couch when convenient. She’s lost. Which doesn’t excuse the following: when she flees her brand new fiance and her dear friend’s wedding reception to “get some air” she winds up at a grocery store, buying beer for some teenagers.

And then she ends up following one of them home. Annika (Chloe Grace Moretz) is pretty interesting for a 16 year old, but the home she shares with her single father Craig (Sam Rockwell) is appealingly simple and cozy to Megan (Keira Knightley) and her quarter life crisis. Of course, the addition of Megan instantly complicates things for everyone and life is never simple. Megan should bloody well know that.

This film is apparently known as Say When in some countries, and I sort of think it

should be in mine as well. Laggies? An expression I was unfamiliar with, but could kind of understand with context. Urban Dictionary, bless its lack of soul, provides several helpful definitions, including 1. dragging along (which I believe Megan is doing) 2. someone who is stalkerish (which Megan borderline is) 3. a combination of both large + saggy, referring to boobs, as in “she’s got a nice rack, but she’s laggy” (which Megan most assuredly is NOT) 4. “the laggies” is a disease (well, a pretend one) caused by chronic masturbation (I’ll let you watch the movie to find out which characters may suffer from it).

Keira Knightly is not entirely convincing in her part or in her accent, but director Lynn Shelton is working really hard to throw a little sympathy her way, which is hard to do when an overeducated, overprivileged white girl is whining about her own indecision. Chloe Grace Moretz and Sam Rockwell, though, are pretty fantastic additions to the cast. They bookend Megan’s 20-something ennui, and give it some perspective. I also appreciated pop-ups from Ellie Kemper and Jeff Garlin; Shelton has a knack for comedy that I can only wish was more present in the script by Andrea Seigel. This film puts a little too much faith in Knightley’s charm. She tries her best to be our plucky heroine but she’s not half as enchanting as she thinks she is, and she’s easily upstaged by her teenage counterpart. Possibly Megan should have locked that shit down while she still could. Instead she’s stuck in that crack between childhood and adulthood, and the only enticement of this film is the viewer’s desire to be the one to give her shove she needs to get the fuck out.

The Mystery Team was a trio of childhood friends who biked around their neighbourhood to find mysteries to solve – a missing diary, a marble down a drain, a windowsill pie tampering. They communicated via walkie talkie and charged their clients just a dime. The Mystery Team is in fact still the same trio, only now they’re high school seniors and if they have no idea how creepy and childish and inappropriate their behaviour has become, everyone else certainly does. 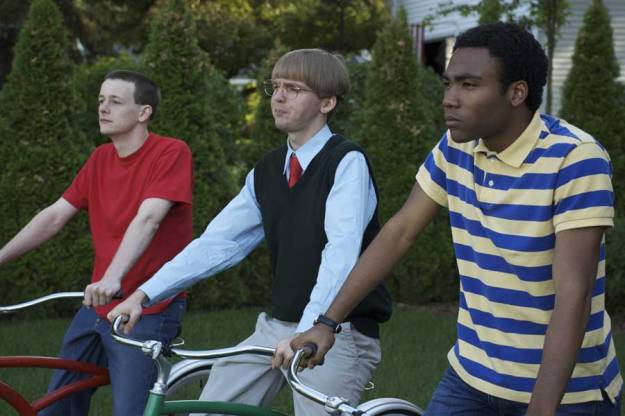 They manage to still get clients though, usually referred by Jamie (Ellie Kemper) but a new family on the block leads to their first ‘adult’ case – a double homicide with a side of stolen jewels. Again, everyone else knows that Jason (Donald Glover) aka The Master of Disguise, Duncan (D.C. Pierson) aka The Boy Genius, and Charlie (Dominic Dierkes) aka The Strongest Kid in the Neighbourhood are in way over their heads, but they’re gung-ho – especially Jason, who might feel his first ‘adult’ stirrings for the new girl next door (Aubrey Plaza).

Is this a good movie? Bottom line: no. There’s definitely humour in just how pathetic these guys are, how clueless, and in some ways, how sweet. But it’s really the only fish in the barrel, so they stretch it out of necessity, and it inevitably wears quite thin. They bumble around foolishly, stumbling upon clues apparently faster than the cops due. Suspicious? About as suspicious as a stripper’s cesarean scar, and yes, that will come up.

I suppose if you have some sort of Scooby Doo fetish, this might be up your alley (sorry, no dog). I enjoy Donald Glover (no relation to Danny) so I tolerated this. I’m not sure that everyone will be able to say the same, and I wouldn’t blame them for a second if they couldn’t.

Illumination Entertainment has taken a page from Pixar’s mega success and included a short in front of their recent effort, The Secret Life of Pets. It’s called Mower Minions and reminds you that these little yellow compatriots are still celebrities to the 6-and-under crowd, their fart jokes just as relevant and hilarious as ever.

On to the main event, a 90 minute movie that also wants to remind you that it’s by the same team behind the Minions.  The little owner of a guinea pig snuggles beside a Minion toy at night.

And a dog gets dressed up as a Minion for Halloween (is it just me or does a second dog get outfitted as the foul-mouthed teddy bear, Ted?). Pixar does the same sly product placement, making sure its current characters are fans and consumers of their older stuff. The comparisons to Pixar, much as the humans behind Despicable Me might hope they continue, pretty much end there.

I liked this movie. Very much. But I’m a dog person and a quadruple dog owner. If you remind me of them, or engage me about them, of course I’ll smile. They’re furry little bundles of unconditional love and loyalty and joy. If you make a movie about dogs and it’s not a complete delight, you’re probably a miserable fuck.

The Secret Life of Pets earns a belly rub every time it reminds you of your own four-legged friends. For me it was the escape via temporary fencing (we had a pool built this summer, and our yard was a logistical nightmare) and the sausage-induced delirium. While I don’t think our

dogs have ever broken into a hot dog factory (though how would I know?), they do experience what we call “wiener fever” every time we have leftovers from the grill.

The movie merely gets a perfunctory pat on the head though when it comes to story-telling. Oh, it’ll please the pants right off your kids. They’ll love it. And you’ll find it much less annoying than those insufferable Minions. But it’s a superficial story that will have no lasting impact on anyone. Of all the talking animal movies this year (Finding Dory, Zootopia), this one will seem inconsequential in comparison. Yes the doggies talked – but what did they have to say?

So take it for what it is: an incredibly talented voice cast, a solid use of 3D, and a pleasant way to either babysit the kids or while away a rainy afternoon.

A lot of funny people came together to make an all-out spoof of Hollywood date movies and, mostly because of the cast, it works better than it really deserves to.

I can’t decide if they weren’t trying hard enough or if they were trying way too hard but the jokes are constant and usually way too obvious, with rom com cliches being called attention to as directly as possible. (The waiter literally has a pole up his ass). There’s a lot here that really doesn’t work. Some jokes go on way too long practically daring you to yell at the screen. But at the rate that they’re spitting out jokes and gags, some are bound to stick and the ones that did had me laughing through the ones that didn’t.

Paul Rudd and Amy Poehler play the two leads and they’re likeability go a long way in selling some pretty lazy writing, a lot of which would probably not make it past dress on an average week at Saturday Night Live. Bill Hader, Ellie Kemper, Ed Helms, Jason Mantzoukas, Cobie Smulders, and New York City are just the tip of the iceberg in a supporting cast that should really know better. Too many funny people worked on this movie for it not to be funnier and I’m almost embarassed that I laughed at all.

I blame Jay a little. I watched it with her and when she laughs I laugh. Don’t watch it alone.