Jay: Yes, actually, it did. I agree that it was “slow” but I kind of liked the control of the pacing. It was very deliberate, which helped build the tension. I also agree that A Most Violent Year was neither terribly violent nor actually a year (the script keeps reminding us, actually, of a strict 30-day countdown, but I suppose “A Pretty Shitty Month” is a less compelling title).

Matt: I actually like A Pretty Shitty Month! The film is set in statistically one of the most violent years in New York’s history. I was born in 1981 and had no idea until now that I was born in A Most Violent Year.

Jay:  The scenes of NYC were unrecognizable to me (and I assume to us) – subways filled with graffiti, garbage overflowing onto the streets – and the movie was shot in a really hazy palette of colour. There was snow, obviously, but also just this bleakness, like everything was beige or maybe sepia is a better word. How did that grittiness add to your understanding of the movie?

Sean: I think the bleakness helped set the tone for the movie. There was no real happy ending other than Abel is a bigger player and maybe as a result he could bribe the DA into giving him a better deal.

Matt: Time and place is everything. This is a very different New York than the one that we know, the one that people talk about from the early 80s. Abel’s world is a dangerous one and director J. C. Chandor immerses us in it. He doesn’t have to show much violence. The mood he creates reminds us of the danger.

Jay: Abel is certainly guilty of fraud and tax evasion, among other charges. Does his refusal to pick up a weapon make him a “good” man? 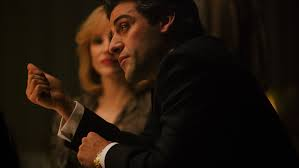 Sean:  No, his choice not to use guns does not redeem him. He seemed to like to think he was better than his peers because of it but he was not a good guy.

Matt: I went into A Most Violent Year expecting a gangster film. What I got was almost an anti-gangster film with Abel doing almost anything to avoid becoming a gangster. He prides himself up until the end on walking a righteous path. Is he as morally superior as he would seem to like to believe? Is he more interested in avoiding the appearance of wrongdoing than he is actual wrongdoing?

Jay: I don’t think he kids himself that it was righteous, just “the most right”, and picking the most right of two wrongs doesn’t exactly equal righteous. He seems to have some interior moral code that he’s following, but mobsters often do have exactly that, a strict code, but one that’s just terribly skewed toward their own ends. Abel aspires to be more of a white-collar criminal rather than a gangster, but that’s just semantics. He doesn’t want to pull the trigger himself, but he doesn’t seem above putting out a hit on someone. He’s all about growing his business, and he seems willing to do that by any means necessary. He’s chasing after the American dream, so appearances do matter. I also think he’s smart; he’s not against committing crimes, and he’s definitely not innocent, but he thinks about consequences.

Jessica Chastain plays a wife who seems to challenge her husband to push his moral compass to the limit in order to “support the family.” Can you relate to these characters? Is there ever a time when, as a husband, you’ve felt that pressure?

Sean: I could not relate to either of the characters. I feel a drive to succeed but not to compromise my values in doing that, and I want to do well for my wife but don’t feel I am pressured to attain anything specific by her in order to support our family.

Jay:  Really? Then I think you’ve misunderstood some things… 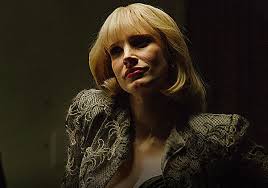 Matt: Uh-oh. So…. Is she the devil on her husband’s shoulder or is their dynamic more complicated than that?

Jay: You know, that’s a really smart question and I couldn’t have put it so well myself. Clearly she’s a little less scrupulous, but she’s also a little less smart. Not to say that she’s dumb. This may be 1981 but she’s no housewife. She’s ambitious and cut-throat and has her own ideas about how to provide for her family. She basically accuses him of being a coward so I’m surprised their marriage isn’t rockier. Ultimately I think he needs her, she’s the one who pushes him to greater heights, she’s partly what motivates him but she’s also what forces him into situations that make him uncomfortable. But as he says early on, “When it feels scary to jump that is exactly when you jump, otherwise you end up staying at the same place your whole life.

Matt: When the Oscar nominations were announced earlier this month, the list of Best Supporting Actress nominees were mostly identical to that of the Golden Globes with Jessica Chastain being replaced by Laura Dern. Should she have been included? According to IMDB, she’s received 18 nominations for her performance while the excellent Oscar Isaac has 3. Why do you think he hasn’t gotten more attention?

Jay: I’m not terribly upset she was left out, but I can’t say that Laura Dern was more worthy. I don’t have a particular appreciation for Jessica Chastain, but there were a couple of scenes that were show-stopping. Plus, anyone who can act through the 80s bangs and the big gaudy earrings and still be noticed has to be doing something right.

As for Oscar Isaac, it is a bit of a mystery. I remember when I first started seeing previews for 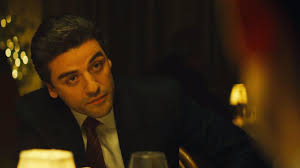 this film in theatres, it took me a while to place Chastain. The shoulder pads were distracting, I guess, not to mention the press-on nails, and I had to go through a rolodex of actresses in my mind before I got to her name and it clicked. Him I recognized right away, but in the movie he seemed way more transformed. Maybe it’s because the last big movie I saw (and loved) him in was Inside Llewyn Davis, and the difference is astonishing. He comports himself like a don, like his empire is vast and his future assured. We know that’s not necessarily the case, but there’s never a hair out of place or a stray piece of lint on his ubiquitous camel coat. Appearances clearly mean a lot to this man; he wants to make it clear he’s risen above his station. And I believe it. I believed his pride, his hubris, his sense of “right.” So I don’t know why he hasn’t been singled out, although considering the #OscarsSoWhite controversy, maybe I have an idea why.
…

7 thoughts on “Three Assholes Talk A Most Violent Year”