I actually worried whether I was the worst person to review this movie, or the best, which would crush me. Jennifer Aniston plays Claire, a woman who suffers from chronic pain, a condition which is not unknown to me. 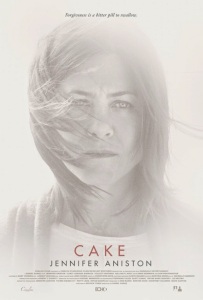 Claire attends a support group for chronic pain sufferers where the members are currently dealing with the recent suicide of one of their own (Anna Kendrick). Claire is unwilling to share in group but is haunted by visions of her dead friend.

Jennifer Aniston is absolutely the reason to see this film. Her performance is very touching because it’s raw and real and visceral. It’s hard to watch, or it was for me. Soon we start to see that there’s a lot more to her pain than just the physical, though the script remains maddeningly vague on these parts. Actually, the story feels anesthetized, like it doesn’t quite want us to feel what we know must be there.

I worried about what it would be like to see the private struggles of my life up on the big screen, but I came away not thinking of myself, but of my husband. In the movie, Claire’s husband (Chris Messina, love him) is estranged and it’s not hard to see how she’s managed to push away all the people in her life. Her pain makes her angry and acerbic, but it’s also a clever strategy for getting rid of people she doesn’t want to deal with. She wants to be in pain, be alone with her pain. Being in pain makes sense to her. Her maid, played lovingly by Adriana Barraza, is her only remaining caregiver, one with seemingly infinite patience for the pills and the bitterness and the constant setbacks. But the brutality of Claire’s expression weighs on her heavily, as it must. This is actually a very sweet and savvy exploration of the relationship between domestic and employer.

The story of what happened to Claire unfolds too slowly, and allows the audience to connect the dots before the big reveals, diluting their punch. But the full story is never wholly understood, so the emotional payoff, both ours and Claire’s, is lacking.