This is what I thought when i first heard about While We’re Young. It’s only when I IMDBed him that I realized that I had really only seen one of his movies. I missed Greenberg. I don’t know how but I missed Frances Ha. But I saw The Squid and the Whale. Baumbach’s 2005 family drama was funny in the saddest way possible and I guess it left so much of an impression on me that I began to think of myself as a fan. But apparently not enough of one to actually watch his other

I did manage to catch his latest- While We’re Young- last week though. Like The Squid and the Whale, it’s funny in a sad way but much more laugh-out-loud funny, while TSATW was more cringe out-loud funny. Ben Stiller and Naomi Watts play  Josh and Cornelia- a forty-something married couple who are finding less and less in common with their friends that have little to talk about other than all the babies that they’re having. Josh starts worrying that his best days are behind him when he discovers that he has arthritis arthritis but all that changes when he meets Jamie and Darby- a couple of sensation-seeking twenty-somethings played by Adam Driver and Amanda Seyfried. Hungry for new 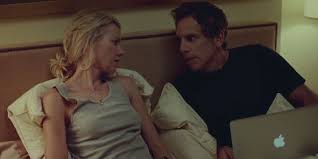 experiences, Josh and Cornelia spend as much time with these new friends as they can and their relationship moves in some surprising directions.

Adam Driver has a weird presence on screen and I’m not sure how I feel about him yet but he and Seyfried are fun to watch as the young couple with surprisingly old-fashioned tastes. They believe it’s better to build a desk than to buy one. They have an extensive record collection while their older friends keep all their music online.. Baumbach doesn’t understand youngsters today any better than Josh does though and the forty-somethings get all the best moments. He manages to keep Stiller’s

instinct to overplay everything to death mostly under control and Watts, in her fourth film since we started this site six months ago, is better than she’s been in a long time, especiallyl when she’s dancing to Tupac.

While We’re Young works best as a comedy about two people trying to be young again and is smart enough to keep it simple and relatable . It loses its focus by the end with a lot of bizarre turns in the last half hour but still gives us a lot to think about- especially when I realized I, at the age of 33, related to Josh and Cornelia a lot more than I did Jamie and Darby. Guess I’m due for another sacred puking ritual.

13 thoughts on “While We’re Young”