I’m having a hard time writing anything about this movie because it really didn’t make an impression. If you don’t have what it takes to be good, then at least have the decency to be bad, and mean it. This one just kind of meanders along the line of blandly okay when it’s not veering too close to annoying (or god forbid, racial caricature), but I did, in all honesty, stumble upon some genuine giggles along the way, so not without merit, but mostly meritless.

Actually, if you mention the title to almost anyone, the reply more than half the time is “Which one is that?” And that’s about all the review you need. It’s forgettable. It follows the formula HARD and colours within the lines even harder. S

ean and I went for drinks before this movie, and when the waitress asked what we were seeing, she responded “Oh, the Cameron Diaz one with that Latino woman?”. Yup, that’s the one.

I wanted to like this movie; you want to like this movie; we all want to get on board. How often does a movie starring women get produced and directed by them as well? This one does, but instead of celebrating it we’re all just kind of looking at our shoelaces.

It’s awkward when a likeable star fails. Reese showed real comedic chops when she did Elle in Legally Blonde, or even better: Tracy Flick in Election. She has an Oscar and her own production company so what the heck is she doing saying yes to a barely mediocre script (a script trying to ride on the coat tails of barely mediocre The Heat) in a vaguely offensive movie? 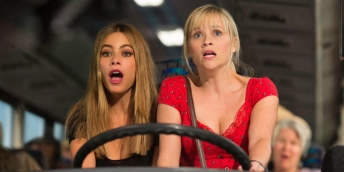 Reese is charming, and even appears to be having fun, but Sofia Vergara isn’t quite up to the task. Poor woman only has one speed, and without the wit of Modern Family, it starts to feel like Latina parody rather than an actual character. I never got the appeal of Vergara. She looks like a drag queen to me, with everything dialed constantly up to 11. Opposite Reese it’s even more vulgar, and the one-notedness more glaring and irritating.