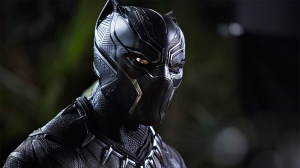 The Marvel Cinematic Universe is so bloated at this point that Marvel usually crams as many superheroes as possible into the “solo” movies in between Avengers instalments.  For example, Iron Man pops up in Spider-Man: Homecoming, Falcon briefly gets in Ant-Man‘s way, and everyone other than Cap and Bucky in Captain America: Civil War are clearly uninvited guests.  The result is that every movie is more or l

ess the same movie.  Clearly, that’s Marvel’s goal with a shared universe as that way, we movie-loving rubes have to see them all, and throw even more cash into Disney’s money bin (which by now must be bigger than Scrooge McDuck’s).

Black Panther is different than those other movies.  It feels fresh.  This is a side of the Marvel Universe we have not seen, with new characters, new challenges, and new disputes.  There are no distractions in the form of random heroes from other movies (full disclosure: there are two supporting characters we’ve seen before but I am willing to overlook that, because both felt like they belonged).  Instead, we are introduced to a whole host of new characters who we quickly feel like we’ve always known, thanks to director/co-writer Ryan Coogler’s stellar work (he’s now three for three in his young career, having already given us Fruitvale Station and Creed).  Refreshingly, none of these new characters are white, and the female characters are just as important as the men (and maybe even more so).

Best of all, this part of the MCU is not based on good versus evil.  Most of the “bad guys” aren’t bad at all, and the biggest bad, Michael B. Jordan’s Killmonger, is one of the most complex villains we’ve ever seen in a superhero movie.  I’d put him second only to Sir Ian McKellen’s Magneto (and that’s a largely unfair comparison because Magneto has been both hero and villain throughout his 55 year career) and well ahead of Heath Ledger’s Joker (who for all his awesomeness is essentially one-dimensional in that his goal was simply to destroy everything). Rather than having a standard comic-book focus, the conflict in Black Panther stems from a substantial philosophical and political question, the answer to which shapes your view of the world.  This is nationalism versus globalism, superhero style, which means that rather than choosing and lobbying elected officials who then debate and vote on these important issues, these weigh

ty disputes in Black Panther are resolved through lots of punching and kicking (which, for all its flaws, is clearly a more efficient political system than the one the USA is currently using).

Black Panther does absolutely everything right.  This is essential viewing and, along with Wonder Woman, shows why diversity in Hollywood is so valuable.  It’s not about political correctness at all.  It’s because a fresh perspective and cultural diversity makes the movie-going experience that much more real and, moreover, provides vitality and energy to a genre that otherwise has been beating the same horse for the last ten years.