At this year’s Oscar ceremony, Julianne Moore took home the statuette for her work in Still Alice while Eddie Redmayne won best actor for The Theory of Everything – but did you know the two

were once co-stars in a twisted little mother-son movie that didn’t quite make it to Matt’s list, or, I’m guessing to anyone else’s.

Answering yes to that question is probably the only reason you should ever watch Savage Grace.

I suppose the acting’s fine, or very fine, but the subject matter is stilted and nobody quite knows 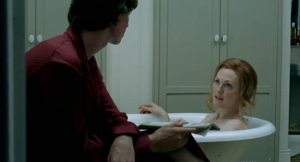 what to do with it. We’re talking about the real-life story of of Barbara Daly, who married above her station to Brooks Baekeland, the dashing heir to the Bakelite plastics fortune. They have exactly one child, a son, Tony, who becomes not just her son but also her replacement-husband. They become…close. Uncomfortably close, by anyon’e standards, ever. She tries to cure his homosexual tendencies by…unconventional means that are also illegal and immoral and explicitly forbidden in the Bible. Ahem.

This can’t possibly end well, can it?