It was easy to like this movie, because this movie loves movies just as much as I do.

I asked Sean if he liked the movie, and he said “yeah.”

I asked him if it made him feel any feelings (I tease him about being a robot but it’s not really teasing because he really is a robot) and he said “yeah.”

I asked him which feelings and he said “sad.”

So there you have it. A movie with a dying girl right in the title made Sean feel sad, which he hid well by not crying and eating lots of nachos with the weird runny cheese.

Me and Earl and the Dying Girl is not really a sad movie, though. It’s a quirky movie that runs in the opposite d 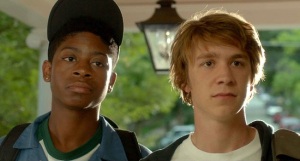 irection of The Fault in Our Stars, which I despised for its manipulation. This one isn’t perfect either, but it allows its teenaged characters to be moody and awkward in sickness and in health.

Greg is surviving high school by keeping superficial ties with everyone while befriending no one – at least that he’ll admit to. Luckily his “co-worker” Earl (actually his best friend) understands his motivations and lets the matter ride. But when the two take on a cancer-ridden third wheel, Greg’s little social experiment starts to get murky as she exposes his insecurities and forces him to deal with people head-on.

You know what? I just realized why I liked this one so much more than The Fault in Our Stars. This one has angst instead of melodrama. There it is: there’s no weird runny cheese. It’s witty,

sometimes a little much, but I felt so much more forgiving of this one because it felt more real. This movie is not about The Dying Girl. It’s about ‘Me’. It’s a movie full of teenaged self-conscious self-centeredness, and I think that’s kind of a sneaky, brilliant angle to bring to this subject matter.

And all three actors – Me (Thomas Mann), and Earl (R.J. Cyler) and The Dying Girl (Olivia Cooke) deserve to be the Next Big Thing. They’re very good at the calculated, laid-back charm that this movie has going for it. I kind of can’t wait to see it again.

13 thoughts on “Me and Earl and the Dying Girl”