‘Cousin Marv’s’ is a Brooklyn bar run and formerly owned by Marv (James Gandolfini) and his cousin Bob (Tom Hardy). The Chechen mob has taken it over for their own devices, often using 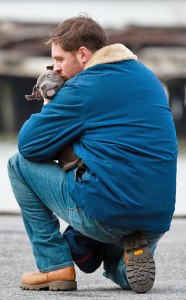 it as a drop – the designated spot where the city’s dirty money will be stored over the course of an evening.

One night the bar is robbed, and now we’re in trouble. Well, they’re in trouble and we’re vicariously in trouble. In a way, this is just another mob movie. Not nice people doing not nice things to other not so nice people. No heroes, no sympathy. But this one kind of rose above for me because Gandolfini and Hardy are both so damned good in it. It’s slow, moody, dark. And to be honest, they probably had me at ‘Tom Hardy with a puppy.”