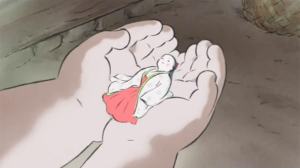 Apparently I’m a bit of a masochist this week – after watching a bunch of foreign movies, I’m watching a few more, including the last Oscar-nominated animated movie on my list, The Tale of the Princess Kaguya, because why watch any old cartoon when you can watch one that’ll make you work hard reading subtitles?

And if you’re thinking that a subtitled cartoon doesn’t sound like much fun, then let tell you about the animation, which is very minimalistic and quite drab, and the story, which is goddamned depressing.

Okay, the truth is, it is quite beautiful. Yes, the lines are simple, hand-drawn, but it is quite lovely. And the colours might more optimistic be described as soft, like water colours. It certainly makes for a stark contrast from the Pixar fare we’re more accustomed to, which doesn’t make it bad, just different – and for me, less engrossing.

The tale is this: an old man, a bamboo cutter, finds a tiny person in a bamboo shoot. He brings her home and when he and his wife decide to raise her, she changes into a baby, but one who grows rapidly. The old man is convinced she is a beautiful princess, so when he finds gold in the bamboo patch, he moves his family into the city and buys her a title, along with everything else that money can buy. The princess is unhappy. She preferred her simple life back home. She’s saddled with a tutor who teaches strict lessons in civility and the etiquette of nobility, while the princess just wants to laugh and play. 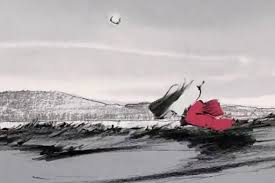 party where she’s meeting suitors – the animation goes to black and white, with a shot of red that really speaks to her fleeing. It was so much stronger a visual than anything that had come before it that it was arresting, and kind of woke me up out of the stupor that I’d been in.

I was watching, as I said, the original Japanese version, with English subtitles, but there does exist a dubbed version James Caan, Mary Steenburgen, Chloe Grace Moretz, Lucy Liu and Darren Criss provide the voice work, and I wondered if maybe that would make it more approachable and help me to get lost in the story. I normally find dubbing to be unforgivably distracting but about half way through the movie I switched over and, well, yeah – lots of white voices behind traditional Japanese characters? Not working. Either way, it felt very abrupt and cold. And if there were times I felt I was picking up on some social satire despite the fact that this is a retelling of a Japanese piece of folklore many centuries old, I still failed to connect with a message in any meaningful way.  The translation is so stiff and awkward it earned chuckles from me it never asked for. 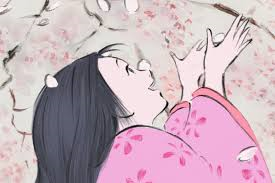 The Tale of the Princess Kaguya has a 100% rating on Rotten Tomatoes. Those are some FRESH tomatoes, but me? I thought it was ketchup. Generic ketchup. Sundried, generic ketchup. I promised myself on a previous review not to feel guilty anymore when I disagree with the critics’ consensus. Where others saw beauty, I felt mostly boredom. And with the exception of a beautiful scene under cherry blossoms, I never felt done right by this movie.

9 thoughts on “The Tale of the Princess Kaguya”