The Longest Week – Jason Bateman plays a dependently wealthy man-child chronically working on (or at least thinking about) the great American novel until one day his parents cut him off, he gets evicted, and he shows up on his best friend’s (Billy Crudup) doorstep, begging for a place to stay. And this might have gone well if he didn’t immediately start crushing on and sleeping with his best friend’s girl (Olivia Wilde). Likeable leads. Aiming for quirky but falls into been there, done that. 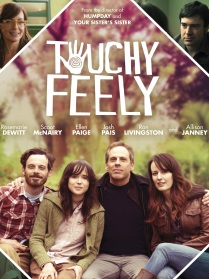 stricken with a complete aversion to touch. She can’t do her job anymore but that’s the least of it: all of her personal relationships start to suffer too. Luckily her brother the dentist starts to do really well healing his patients thanks to his daughter (Ellen Page) breeching protocol. The uptight family does some X and wander around and just like this movie, they never really go anywhere.

Life of Crime – Tim Robbins is a rich old white guy with a young, hot wife (Jennifer Aniston) but leaves his wife for a younger, hott

er mistress (Isla Fisher). Too bad some dumb criminals pick this exact moment to kidnap the wife and demand a hefty ransom. Sure he has the money, but now that he thinks about, he wouldn’t mind if his wife just disappeared – in fact, it would save him on alimony. Not the best Elmore Leonard adaptation but solid, and sometimes charming.

The Giant Mechanical Man – Jenna Fischer plays a woman who’s a little too old to still not know what she wants to be when she grows up. Temping isn’t paying what it used to and

she has to move in with her uppity little sister. She feels comforted by the giant mechanical man (Chris Messina) when she spots him around the city – one of those street performers who dress up like a metal statue and never move. Turns out the mechanical man is going through a transition period himself. His girlfriend’s left him because he spends his day wearing silver paint rather than being gainfully employed. The two finally meet when they both take jobs far below their stations, and bond over their common loserdom. It’s quietly sweet, but it’s hard not to think that Pam belongs with Jim, and Danny with Mindy. Call me crazy.