Two years ago for Christmas, my niece gifted me with a book – The New York Times 36 Hours (150 Hours in the USA & Canada), a nod to my ADD approach to vacationing. I love seeing new places, and old favourite places, and I’m usually planning my next vacation on the plane ride home from my current vacation. This month alone, I’ve spent time in Los Angeles, San Francisco, and Montreal, so we thought, why not one more?

Which is why we’re on the way to Boston! We’ve been to Boston before of course, and covered the major Boston highlights except for one glaring omission: Fenway. Although I did once declare to a befuddled waitress that I was one my way to Fenway. This was in Chicago, and I believe they pronounce their ball park “Wrigley”, but anyway, I digress. Our last trip to Boston was more football-centric, to be fair, but we always knew we’d be back, and after having so much fun watching the Giants win in AT&T park a few weeks ago, we were inspired to cross another stadium off our bucket list.

Which is why earlier this week I watched Fever Pitch – the awful American one. Okay, maybe it’s 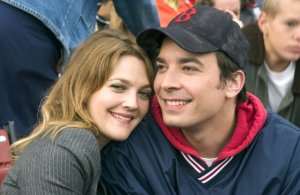 not so awful. I read the essay of course, an autobiographical recounting of Nick Hornby’s obsession with Arsenal football as a young man. They turned this into a movie in 1997, starring Colin Firth, and it sort of became a weird and delightful sporty romcom, about how his best girl had to compete against his best team. Then in 2005, that movie got the Farrelly brother Americanization treatment and it became  a movie obsessed with baseball, and what team better to be obsessed with than the Boston Red Sox? It just so happens that the year they filmed it, 2004, turned out to be an incredibly seminal season for the Sox, and the Farrellys had to keep rewriting the script.

I have to admit this movie is not without its charms – Jimmy Fallon and Drew Barrymore have some great chemistry (and well they should – Jimmy Fallon was the new Adam Sandler, and then 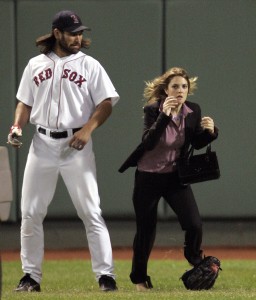 Adam Samberg was the new Jimmy Fallon, and that’s where I lose the trail as I’ve no idea who the current Adam Sandler on SNL is, but I do know that all these guys work well together, and Drew has a surprisingly high tolerance for them). Surprisingly though, the Red Sox insist on stealing the show, and it’s unbelievably cool that they happened to be filming at precisely the right time. Upping the factor on the Boston love-in, the film cast real-life die-hard fans as seen in the previous year’s documentary Still We Believe: The Boston Red Sox Movie in various minor roles.

This film garnered no awards, and even angered some sports fans who felt this was just a chick flick wearing sheep’s clothing (or, you know, a Sox warm-up jacket), but it did earn Jimmy Fallon an honorary membership to the Red Sox Nation for playing Ben so convincingly in spite of being a lifelong Yankee fan. There’s something magical about that park and I look forward to experiencing it in person.