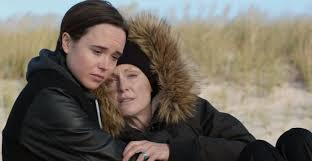 I was moved- and pissed off- by Freeheld, as I’m sure director Peter Sollett and screenwriter Ron Nyswaner intended and I can only imagine what it must have been like to attend the premiere the night before.

Freeheld tells the true story of veteran police officer Laurel Hester’s battle for the right to pass on her pension benefits to Stacie Andree, her same-sex partner, when she’s diagnosed with lung cancer. Justice doesn’t come easy. Some cops have a big problem with a domestic partner having the same benefits as their wives do and those that don’t are too afraid to speak up. Some freeholders, despite having the legal right to honour her request, refuse on the grounds of their own religious beliefs.

This movie made me mad. “God will be mad” as an excuse for withholding from others what is rightfully theirs, has been getting old for a long time. How gay marraige affects straight people in any way is something I will never understand. Still, the right finds ways to insist that their own rights are being violated. So, yes, I rooted very strongly for these characters and against those who stood in their way and I could tell that Monday’s TIFF audience did too.

Freeheld succeeds admirably as a piece of Preaching to the Choir, even if not necessarily as a piece of cinema. Nyswaner’s script seems carefully designed to beg for as many Oscars as possible, with almost every character being given their Big Speech Oscar moment.

He pretty much gets away with it too. Julianne Moore, Ellen Page, Michael Shannon, and Steve Carell elevate the lazy writing, nail their speeches, and each bring something special and unique the the project. The outstanding acting and undeniably interesting and important story go a long way in saving this otherwise conventional drama.