Not to be confused with the latest Pixar offering, Inside Out is a not-for-profit film festival that runs in both Toronto and Ottawa and showcases movies from around the world that are made by or about the LGBT community. Access to queer cinema is a big draw in the community, as evidenced by a packed house at the Bytowne and the enthusiastic applause that ended the night. Inside Out screened The Girl King earlier this week, which you may know we took in a few days ago at another film festival. That’s right. We hit up two film festivals this weekend alone.

We did catch a screening of Fourth Man Out, about a small-town car mechanic who comes out to his best friends on his 24th birthday. They promise him that their relationship won’t change…famous last words. Because things fucking change. Of course they do. The quartet of young actors are great

together, but I’m not going to call this a bromance because I think that word cheapens and mocks friendship between men. They are good friends, and Adam’s coming out does mark a big transition for the group – although it’s someone on the outside who has to remind them that this is not really about how hard it is for them. The movie is legitimately funny and accessible, but as Matt pointed out, feels a bit dated. “It’s okay that our friend is gay” feels like something that should have been made 15 years ago, and if it’s taken this long for a movie like this to get made, that’s a sad commentary indeed and even more justification for festivals like this to exist.

Another movie that we haven’t begun to talk about yet is Mississippi Grind, which Sean and I saw at the New Hampshire Film Festival (a third festival, but that was last week, keep up!). Mississippi Grind is about a chronic gambler (Ben Mendelsohn) who meets a human good luck charm, or so he 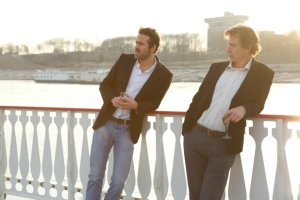 believes (Ryan Reynolds), who bankrolls his new loser buddy on a redemptive road trip. They scheme to travel the country together raking in the big bucks, but let’s remember that gambling is a serious addiction, and these people never know when to quit, and, voila: you know this isn’t going to get a happy ending. Ben Mendelsohn is great, and as much as I loved him in Animal Kingdom, it’s nice to see him in such a nuanced role; he seems quite comfortable straddling the line between pathetic and hopeful. Ryan Reynolds is at his best, which is nowhere near what Mendelsohn is doing, but he’s in his comfort zone so this odd pairing works on a strictly chemistry level. The script is loose and leisurely, maybe too leisurely for its genre, but I enjoyed its unpredictability and defiance of the expected arc.

13 thoughts on “Inside Out Film Festival”