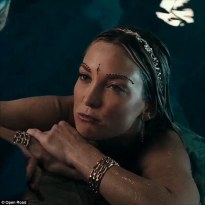 Rock The Kasbah: a has-been (never was?) agent (Billy Murray) decides to cash in on his one remaining client (Zooey Deschanel) and have her tour the USO circuit in Afghanistan. A panic attack has her taking off with his cash and passport, which means he’s stuck in the middle east with his thumb up his ass. He meets a number of expats – Scott Caan and Danny McBride are war profiteers, Kate Hudson is a very profitable hooker, and Bruce Willis is “Bombay Brian” – but none are overly helpful (unless you count being hog-tied in a Marilyn Monroe wig, which I don’t) and some are down right exploitative. But then he comes across big talent (Leem Lubany) in a small cave in Kabul, and convinces her to seek fame and fortune on Afghan Star (their American Idol). The

only problem: women in her culture are forbidden to sing, or to even remove the face covering that would allow her to do so. Critics are savaging this as a one-note performance and I suppose they’re right. I kinda loved it though. I love Bill Murray, and I liked Kate Hudson very much in this too. I wish we could have seen more of Deschanel but Lubany was such an interesting discovery I couldn’t help but root for her.

Our Brand is Crisis: Sandra Bullock and Billy Bob Thornton play fictionalized versions of American political analysts brought in to

help rival parties during a Bolivian presidential election (based on a true story and a documentary of the same name). This movie goes straight to a cynic’s heart, not even bothering to pretend that politics are remotely about doing good or making change, or that elections are the will of the people. They have no respect for the electorate they manipulate so easily. I’m not always crazy about Bullock but she’s better in this than I’ve seen her before. Her talents are harnessed effectively, her comedic timing not wasted on idiotic movies nobody would ever watch if it wasn’t for cross-Atlantic flights (and this role was converted for her – it was originally intended for  man). That said, there’s a little something lacking in Our Brand is Crisis. It’s not biting enough. You can’t make a political satire and then go limp.

Burnt: the Assholes were busy dancing with Dan Aykroyd so we passed our screener tickets along to a couple of conscripted assholes, Justin and Ben.  When I asked Justin what he thought

about the movie, about a nasty chef played by Bradley Cooper, he said “It was good.” So what do you think? Does he have what it takes to become a permanent Asshole? When prodded for further detail, he called it “decent”, which in a way is a win because half of all of Justin’s movie reviews consist of him making the retching throw up sound, but it’s also a loss because what he means is: it’s fine. If you’re curious to see Cooper play an asshole, then rent it when it comes out on DVD, but don’t waste your money on this one.

16 thoughts on “Coming Soon to a Theatre Near You”