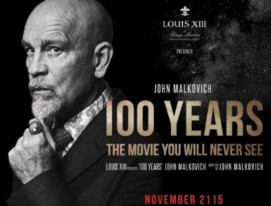 Robert Rodriguez and John Malkovich made a movie together that won’t be released until November 18, 2215. That’s right – 100 years from now. It’s literally locked up in a safe until then. Neither you nor I will likely still be around to see it, but Louis XIII Cognac (uncoincidentally also aged 100 years) is giving away 1000 metal tickets that will allow your descendents to attend the screening a

century from now. Well, not your descendents. The descendents of carefully selected “influential” individuals, who can no doubt afford the 3K price tag on a bottle of the Remy cognac. I’m sure their grandkids will be chomping at the bit to see the final unseen film from the man who brought them Sin City: A Dame To Kill For.

Aside from a publicity stunt, what is art without an audience? And in an age of micro-attention spans, 140 character tweets, and Redbull – is a century of secrecy maybe actually a good thing?

And if we were to open a time capsule today containing a movie made 100 years ago intended for viewing in 2015, what would it look like?

Even Malkovich and Rodriguez haven’t seen the finished work – and I wonder if that’s like having an itch you can’t scratch for the rest of your life. I have it on good authority that they do, however, have those elusive metal tickets. I think they should make tickets available to the descendants of Richard Linklater and Ellar Coltrane – director and star of Boyhood, which made waves last year for being a measly 12 years in the making. Oh, only a dozen, Linklater? I’ll see your 12 and raise you A CENTURY. Microphone drop.